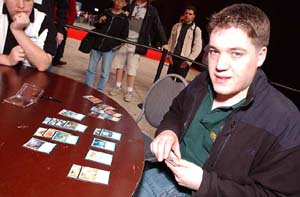 Without a doubt, Kai Budde is "the man". In the past Pro Tour season, he has won another two Pro Tours to bring his total to five. He has made Magic players around the world ask "Finkel who?" as he tears through tournament after tournament, showing the world that there are two levels of play skill: Kai, and everyone else. So, when Kai made it to the Top 8 yesterday, the general consensus was that he was by far the odds on favorite to leave Nice with the championship yet again. Besides being the undisputed best player in the world, he has also never lost on a Pro Tour Sunday. Would the streak be broken, or would Kai have to figure out how to make more space in his trophy case?

Kai opened his first pack, and saw Braids, Cabal Minion, Gravedigger, Muscle Burst, and Aven Fisher. Most players would gladly take the Braids, but Kai had other ideas. He took the Fisher, passing Braids along with the Gravedigger. This meant that the two players to his left would go into black, leaving Kai to take a different support color for blue that would give him more depth. He continued to pass good black cards with his second pick, taking AEther Burst over Patriarch's Desire. Third pick provided Aven Smokeweaver, and the fourth pick forced Kai to make a decision: Dusk Imp or Hallowed Healer; go black, or go white. He seemed to consider the Dusk Imp, but after passing all that black it wasn't a wonderful option. So, Kai took the Healer, going into the most underdrafted color in the format. Still, white is underdrafted for a reason: it's by far the weakest color in the format. But, if he could cut it off with the help of the black cards he passed, Kai would get hooked up with very solid late pick white cards.

He took Luminous Guardian next to cement his deck into white, and the sixth pick presented an odd late choice: Repel or Balshan Griffin. While it was great to get one of these cards much later than usual, it meant passing one of them as well. He had already passed quality blue cards like Scrivener and Aven Fisher, so chances were that he was setting up Benjamin Niedriger on his left into blue. The last playable picks out of pack one were Graceful Antelope and Kirtar's Desire.

The two possible first picks in the second pack were Firebolt or Cephalid Scout. Firebolt is an excellent spell, but would require splashing a third color. On the other hand, Cephalid Scout is a great blue/white card, but not first pick material. Kai took the Scout, and followed up by picking up Treetop Sentinel. A third pick Nomad Decoy rewarded him for going into white, as did Aven Flock. Dreamwinder along with a seventh pick Kirtar's Desire helped Kai to collect a very solid pool of cards heading into Torment.

However, unfortunately for Kai, Torment was a nightmare. The pack he opened contained Mutilate, Faceless Butcher, Chainer's Edict, Fiery Temper, Temporary Insanity, and Aquamoeba. Kai took the Butcher even though it has double black mana in its casting cost, to the disbelief of commentator Gary Wise. Wise believes Kai should have drafted Temporary Insanity, which is easily splashable and very powerful. The second pick presented yet another Temporary Insanity, but Kai stayed on course with Deep Analysis. The rest of Torment gave Kai Hydromorph Gull, Skywing Aven, Waste Away and Circular Logic.

Sideboard: So how do you feel it went?
Kai: Not very well. I didn't really see any powerful cards like (Cephalid) Looter, no good uncommons or rares. Not even Psionic Gift, which is really important for this deck. I'm not very happy about it.

Sideboard: First pick, first pack what were you thinking exactly?
Kai: That's a bad pack. The thing is, if I take one of the black cards...like, I only want to draft black/blue if I go black. Green is alright, but I don't really like black/white or black/red at all. So, I prefer to just take the slightly worse blue card (Aven Fisher) over the Gravedigger, just to make sure that I can go blue/white.

Sideboard: And then force everyone else...
Kai: Yes. I was pretty disappointed when I got my third pick first pack, which contained Fisher, Scrivener and Smokeweaver. Up until that point, I hadn't passed a single blue card. So, if there was only one good blue card in there, I could cut off all the blue, but it didn't work out.

Sideboard: Are you planning to play the Butcher?
Kai: I don't know yet. I'll probably play it.

Sideboard: Gary Wise was just talking to you about the Temporary Insanities. Is there any reason you didn't take those?
Kai: I didn't think that there would be more red cards coming up later, and I'm not a huge fan of Temporary Insanity.

Sideboard: Any predictions? How do you think you're going to do with this deck?
Kai: I'm not winning.

Sideboard: So the streak is over?
Kai: The streak is over. There will be some deck that is going to crush me. If I walk into a good blue/white or blue/black...if Bram is playing a green deck, then I think I can beat him.