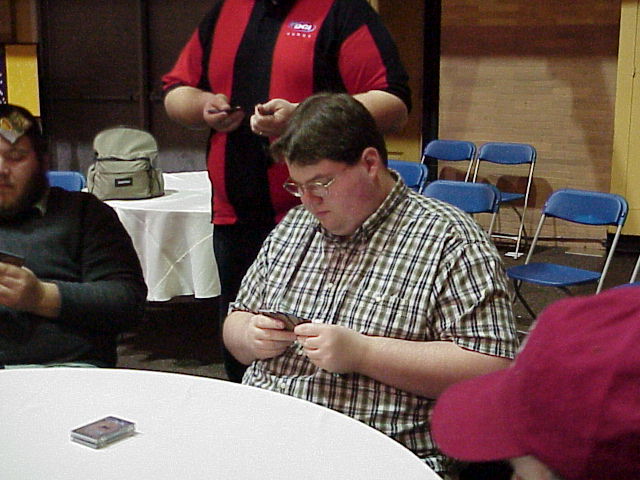 Kyle Rose made the Top 8 of the Invasion Draft Pro Tour Los Angeles a few weeks ago. He also won the Booster Draft Pro Tour London so there are no doubts about his Limited skills. With two Constructed Top 8s to his credit too, there basically just aren't any doubts that he's one of the best Magic players in the world. He was joined in the Top 8 by, in order to his left, Scott Johns, Tom Swan, Matt Vienneau, Alan Comer, Brian Hegstad, Chris Benafel, and Kurtis "Fat Man" Hahn.

Rose took first pick Fact or Fiction (over Tribal Flames and Soul Burn) and followed up with Wash Out (over Halam Djinn and Yavimaya Barbarian). He seemed well on his way to an aggressive blue/white deck when he picked Galina's Knight, but then he got a Tribal Flames because there wasn't anything else in that pack. When he got passed fifth pick Plague Spores, Rose saw the writing on the wall, took it, and switched to black/red with a splash of blue. His next picks weren't all that exciting (Hypnotic Cloud, Zap, Kavu Scout (over Razorfoot Griffin), and Viashino Grappler, but he knew he was going to get hooked up in Planeshift.

Scott Johns also opened up a Fact or Fiction, but he passed his on down in favor of Agonizing Demise. I was very surprised when he then drafted Urborg Drake over Soul Burn. Johns then drafted the Halam Djinn that Rose passed him, followed by a Viashino Grappler. The rest of Scott's draft saw him take the best blue, black, or red cards with little rhyme or reason. By the end, he drifted into blue/black with just a touch of red so he and Rose weren't completely competing, but it's certainly not good when you draft the same colors as the guy feeding you. He wound up with a pretty good sealed deck. His bombs included Crypt Angel, Plague Spitter, and Demise, but his mana curve seems top heavy and he just didn't wind up with a very cohesive deck.

Rose opened an Agonizing Demise of his own in the second set of packs and then got passed Spite/Malice (because Johns took the Crypt Angel). Two Shivan Zombies marched into his deck and were exactly what Kyle was hoping for. Invasion died up after that, but he made up for it in Planeshift. That 5th pick Plague Spores changed everything and here's what he got hooked up with as a reward for switching colors: Terminate, Mire Kavu, Caldera Kavu, Crosis's Charm, Lava Zombie, Kavu Recluse, Lava Zombie, a pair of Morgue Toads, and a Maggot Carrier. His original deck wasn't easy to draft given that Kurt Hahn was feeding him and drafting the exact same deck that Rose started out trying to draft (blue/white aggro), but Kyle read the draft very well and wound up with a fine deck because of it.