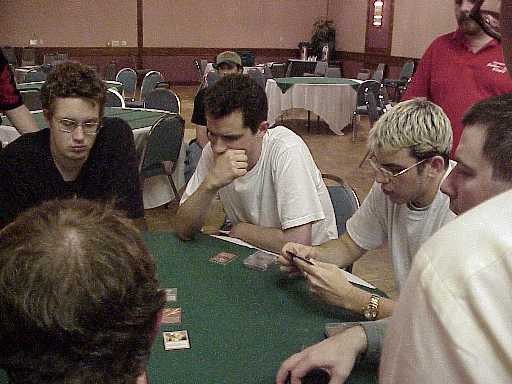 Matt Vienneau has had a great weekend thus far - winning the Swiss by a 3 full points with a 12-1 record. That gave him the right to force his first round opponent - Trevor Blackwell - to draft first during the Top 8 Rochester draft. Blackwell took Thornscape Apprentice over Tower Drake and after Dustin Stern took the Drake second there wasn't a lot left in the pack. However, that didn't prevent the players from signaling their intentions. Ben Romig, who was feeding Vienneau, took Cursed Flesh but Vienneau went ahead and took Firescreamer anyway.

Dustin Stern then opened up Phyrexian Delver and Breath of Darigaaz - two excellent cards. Since he already had a blue card (Tower Drake), he preferred to take black card - the Delver. Linde gladly took the Breath and proceeded to draft heavy red. Romig took Thornscape Apprentice third, Vienneau took Tribal Flames, and then Benafel took Tower Drake. The fighting continued in pack #3: Linde took first pick Scorching Lava leaving the black Djinn to Romig and Phyrexian Slayer to Vienneau. Benafel took Glimmering Angel. Romig opened an Annihilate for himself in pack 4 and Vienneau came right back over the top at him, drafting Phyrexian Slayer over both Tribal Flames and Benalish Trapper. Benafel cemented his hold on white with the Trapper and Leiher continued picking up the remnants by taking the Tribal Flames. 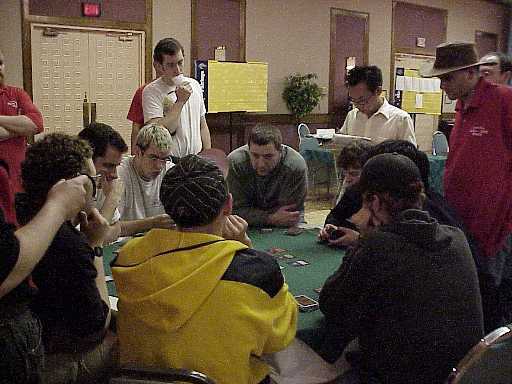 Vienneau opened and drafted a Power Armor and Benafel followed that up with a very strange pick: Llanowar Knight over Exclude. At this point Benafel had white cards plus a Tower Drake. However, he as keeping a close eye on his first round opponent (Dustin Stern) and since Stern was heavily into black, Benafel decided he wanted the pro-black Knight rather than the highly rated Exclude. Leiher gladly took the Exclude and said hello to color #4. Benafel next drafted Razorfoot Griffin over Probe and Benalish Heralds. Leiher scooped up the Probe, first picked a Duskwalker (over Tribal Flames and Glimmering Angel) out of the next pack, and settled down into a solid black/blue deck.

Vienneau savagely hate-drafted Chris Benafel in pack 7, drafting an Explosive Growth after Benafel had abandoned blue so he could be the lone green mage on their side of the table. However, three packs later Pete Leiher opened up Darigaaz, the Igniter and it wound up available to Vienneau at third pick. Suddenly Vienneau was playing green after all. (Leiher took Sleeper's Robe over Darigaaz and Benafel took Rampant Elephant.) Romig then followed up with Plague Spores and Linde got yet another Scorching Lava.

That was basically it for the negotiating of colors. Romig played black/blue with maybe a touch of red. Vienneau played black/red plus the b/r/g dragon. Benafel played green/white/red. And I thought Pete Leiher drafted very intelligently. He waited for Vienneau and Benafel to decide what they were doing and then he abandoned the couple of green and red cards that he had in favor of a black/blue strategy. Leiher's deck wound up a touch slow, but I thought his color switch was pretty smart.

Blackwell was definitely hurt by going first as Clegg and Leiher couldn't figure out what cols they were for quite a while. Blackwell stuck to green/white, splashing a little red. His card quality looked a little low, but in the last few packs he picked up a second Armadillo Cloak and then in the very last pack he drafted a second pick Treva, the Renewer. Because Blackwell had picked up a very Fertile Grounds earlier in the draft even when it looked like he might not need them, he can easily pay his Dragon.

Dustin Stern also seemed to draft a good deck. He wound up with multiple quality rares from his three colors - black, blue, and white. All in all I thought everyone drafted pretty well. The formats lends itself to color switching and forces players to constantly update their understanding of both their own options and who is drafting what.