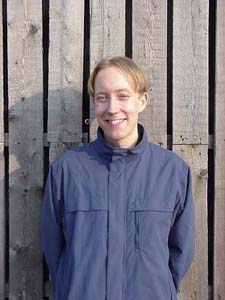 Mattias JorstedtWhen opening up the first booster, Mattias was facing a real challenge, with quality cards Mindslicer, Wild Mogrel, Springing Tiger, Healer, and Aven Windreader. He decided for the Windreader, as it was the only blue card in the pack, believing as well that Kai on his left would take the Mongrel. Kai took the Painbringer as his first pick and was happy to recieve the Wild Mongrel as second pick. It showed later that both drafters on his left side (Kai Budde and Florent Jeudon, the top two of this tournament) went into green/black.

Mattias looked to go blue/white as he got Aven Flock for a second pick. He feared white shortage and started drafting red, with Barbarian Lunatic, Thermal Blast, Frenetic Orge (sideboard card), Halberdier as his important drafted cards in the first booster. That showed that he was tending to blue/red, the colour combination he had praticed earlier today, which gave him a 2-0-1 at that table and secured him a top 8 slot.

Torment was nice to him, with Possessed Barbarian. He then got Deep Analysis, which the deck badly needed. (Kai was passed Carrion Wurm, a good help for his already amazing deck). Pardic Arsonist, the new FLK then joined his deck, followed by the second Deep Analysis, Sonic Seizure, Crackling Club, Fiery Temper, Pardic Lancer and Chunning Eddie.

After going through his cards, he decided for cracking blue/red once again. The deck had its amazing blue card drawer and red burn controll, and could come out aggresively both on land and on air. It had a similar blue/red strategy as is used in Constructed: you win by taking control of the table, trading red damages for creatures, and winning the card race with the blue card drawing machine. Mattias showed this clearly in his quarterfinal match, dispatching Christoph Lippert black/red deck quite comfortably.

Mattias showed us here that red should be considered as it tends to be under drafted often enough, and that trusting your instinct pays off.

1 Chatter of the Squirrel 1 Simplify