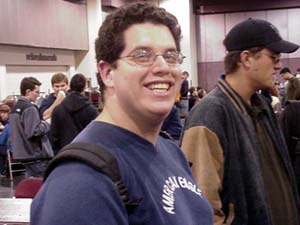 How has he failed?

Well, Mike Turian has failed to lose a match in this Grand Prix. At 11-0-3, we thought it might be a good idea to see what he is doing that we should know about. When asked to comment on his success, all he had to say was, "Rachel (Mike's fiance) said she liked Black - so I drafted black!"

Mike said that he was pretty sure that the two players to his left (Ian Spaulding and Dave Humpherys) wanted to draft White, and that Ben Rubin on his right wanted to force the Blue/Black/Red affinity.

In the first pack Mike had the choice of Bonesplitter, Leonin Skyhunter, Skyhunter Cub, and Predator's Strike. Mike took the Bonesplitter, hoping that the Skyhunters would put the two fellows to his left both into White, setting him up for a good draft. In the second pack, Ben passed Mike the choice of Fangren Hunter, Mind's Eye, and Altar's Light - taking the Fangren Hunter, Mike continued with his plan, hoping Ian would take Minds Eye and Dave would take the Altar's Light.

Mike did not want to compimise his mana base because he already had a Fangren Hunter and only wanted to splash black for the Shard - when asked about mike responded with "Meh, I don't really like drain life anyways!" The rest of the first pack was mediocre, with Mike picking up a 7th pick Steel Wall and a few Malachite Golems that didn't make the cut.

In the second pack, Mike opened Scythe of the Wretched, Fangren Hunter, Leonin Skyhunter, and a Slith Bloodletter. Mike was deciding between the Hunter and the Bloodletter, but with his commitment to stay mostly Green, he took his second Fangren Hunter - not bad by any means. He continued with a second pick Predator's Strike over yet another Consume Spirit. In the next pack, he took a Relic Bane over a fourth Consume Spirit. The mono Black deck with multiple Consume Spirits might have turned out very well, but alas, you can never really predict when you will get a shot at four Consume Spirits. Mikes fourth pick was better than his first, One Dozen Eyes. His 5th pick was Bottle Gnomes over a Leonin Scimitar, a good pick considering he already had a Skeleton Shard.

The rest of the pack yeilded a Nim Shambler, Mikes first mana accelerator in the form of a Talisman of Impulse, a Tel-Jilad Exile, and a Wurmskin Forager. Near the end of the pack, Mike hated an 11th pick Roar of the Kha, sending a confusing message that his trick of getting everyone to draft white might not of worked. As it turned out, Ian had just taken a better card (Viridian Longbow) over it 10th pick.

Mike's Darksteel pack yeilded a frown. The pack had several good White cards and an Echoing Ruin, but really nothing for Mike's Green/Black deck. He finally settled on first picking Arcbound Hybrid - not stellar by any means, but at least it was good with Skeleton Shard. Mike then second picked a Tangle Golem over Chittering Rats, then 3rd picked the Juggernaut over another Chittering Rats and a Tangle Spider.

I would like to take a second to give tribute to the Juggernaut. You see, back home in Pittsburgh where Mike lives, the Juggernaut has been a part of a running joke for a long time now. Needless to say, he was hoping to win the GP with an attack from the most aggressive creature in Magic.

Mike continued by picking an Essence Drain and an Arcbound Stinger - his first flier. Mike Then picked an Echoing Courage over yet another Chittering Rat, later saying that the courage was a card that he was really looking for due to his One Dozen Eyes…that little Giant Growth can turn into an Overrun. Mike then got a 7th pick Arcbound Hybrid to go with his first pick one, and finished up the draft getting a nice gift, a 10th pick Arcbound Bruiser.

Mike's deck turned out very aggressive, but he didn't have any artifact removal and very few fliers. If he wants to win the prize, he is going to take a lesson from the Juggernaut and attack if able. Even though he didn't end up with the 4 Consume Spirit and 3 Chittering Rat deck, he was happy with the way things turned out and was feeling good about his first round matchup.