Singapore's Nick Wong might be hard to recognize this weekend. His "lucky" stuffed duck, that had been by his side at so many Tours and Grand Prix had finally steered him wrong once too often, and got tossed like so much trash. Wong remains his flashy, effervescent self. Sporting silver and gold dyed hair (perhaps hoping for a lucrative weekend?) and rarely without a smile, Wong played hard this weekend, even overcoming his Feature Match Curse to make Top 8. The victory was bittersweet, however, coming as it did against a friend, and through manascrew.

Wong managed to put that behind him in time for the Top 8, and was all concentration as he sat down. He spent Day 2 drafting white-black, and rather successfully. Going into the Top 8 he thought that he would look for that combination, but not force it.

Right away Wong got Ghastly Demise. It wasn't a bomb, but its a card he likes to play. The next pack gave him a dilemma. Zombify, Second Thoughts, Kirtar's Desire, or Elephant Ambush. Nick's love affair with black-white couldn't hold him, and he took the Ambush.

Immediately he regretted it. Krosan Avenger was the lone green common, giving him the heads-up that Alex Shvartsman, to his right, was into green. He took Caustic Tar. He sighed with relief when the next pack came up bereft of green. He took Aven Flock over Zombie Assassin. But things were heading wrong, and fast. He saw Flame Burst, Krosan Avenger, and Aven Archer. He bit the bullet and took the Burst.

Then, nothing. Just a Filthy Cur. Then Engulfing Flames. Then Rites of Initiation. It looked like Wong had been completely shut out of the draft. Barbarian Ring, Anarchist, Scorching Missile and Thermal Blast came around, but Wong was not happy.

After the first pack, Shvartsman was black-green, which Wong had already sensed. To his left, Yujian Zhou was into black-white, but had leanings towards blue. That left red, and red alone, safe. 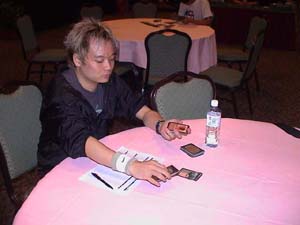 Wong passed up the brutal Bomb Squad in favor of Ember Beast to start the second set of packs. He justified this by saying that the Squad is only great against certain combinations. He'd rather have a card that would always serve him. Next he took Ghastly Demise, then Dusk Imp. Another Demise followed, and now Wong wouldn't be able to take advantagae of black's graveyard-stripping effects.

Short on creatures, he was happy to pick up Morgue Theft and Zombify, but then the packs seemed to run out. It was all up to Torment.

He started strong, with Faceless Butcher, then Violent Eruption over Crippling Fatigue. He scored Petravark, then Mesmeric Fiend, but for that last he had to give up Barbarian Outcast and Pardic Lancer. Temporary Insanity added to the trouble he could cause creatures, and he was forced to take Pitchstone Wall over another Outcast, as he probably wouldn't be able to get the creatures to be anything but control.

Overall, Wong was disappointed. His deck has strong removal but very few ways to win. In topdecking situations, such that his deck is good at forcing, he will probably come out the loser. However, he was confident that he did the best with what he'd drafted. Surprisingly, he left the third Demise in the board.