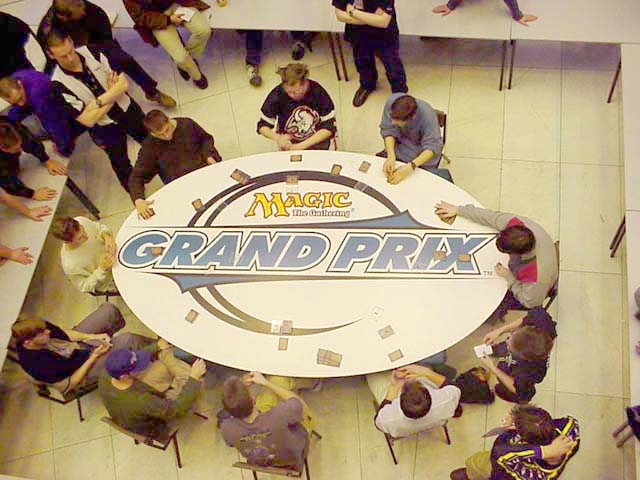 With Noah to the immediate left of Ryan in this draft, it would be surprising if they didn't have some idea of what colors they were going to draft, or at least intended to draft if the booster packs turned out that way.

Here is where things got interesting. Although Noah had picked Armadillo Cloak ahead of Agonizing Demise already, the fact that he was passed another Demise confused him into thinking that Ryan was not black. If he had checked through the booster, he would have seen that the rare was missing, so it was quite possible that Ryan had taken a black card since Yawgmoth's Agenda, Crypt Angel, and Pyre Zombie are among the cards Ryan would take above the Demise. 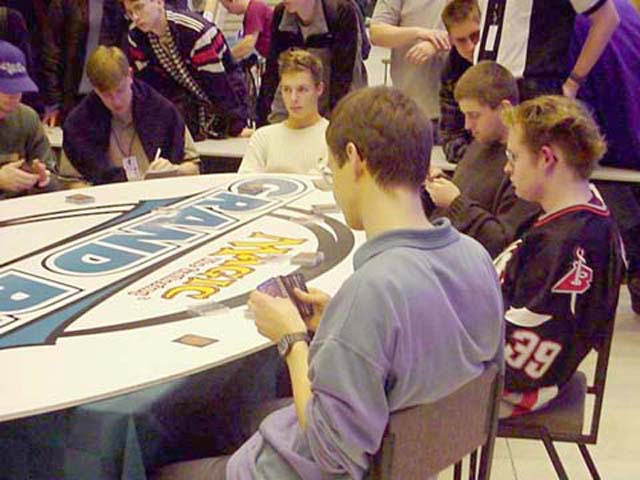 Be this as it may, Noah took the Agonizing Demise, and Ryan took a Scorching Lava. Next pick Noah was again faced with a difficult choice - the only cards that were good were Tower Drake, Pincer Spider, Hate Weaver, and Ruham Djinn. He still wasn't sure what colors he was playing as he hadn't made a definite decision yet, and figured that he could still afford to wait and see, so he took Tower Drake, probably the best card in the pack in terms of raw power.

Fuller was pretty much already set into Red and Black, and continued in the same vein, with two Shivan Zombies, two Zaps, and an Urborg Phantom among his later picks. Noah found a home in Red/Green with Serpentine Kavu, Ancient Kavu, and Quirion Elves among other things.

Boeken carried on with this theme in the second set of packs, and he made it clear that he was going three colors with another Agonizing Demise. This set of choices was pretty kind to him, he got Serpentine Kavu, the Demise, Kavu Titan, Yavimaya Barbarian, Kavu Aggressor, two Nomadic Elves, and then an Aggressive Urge.

One thing that was noted by the players and the spectators was that the quality of white and blue cards in the packs was very low. Noah and Ryan had successfully avoided these colors but that did mean that they were fighting each other for black and red, although Noah didn't have that much black. 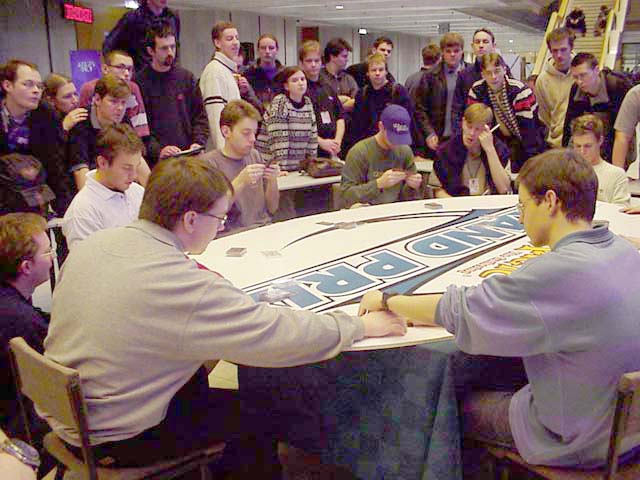 Ryan got a Plague Spitter, a Spite/Malice (which he took over a second Plague Spitter and a Keldon Necropolis), a Maniacal Rage, and Ancient Kavu. His late picks were reasonable, but the top quality picks dried up a little quickly this time.

In Planeshift, Ryan got some more good cards - two Lava Zombies, Bog Down, Caldera Kavu, and Magma Burst. His deck was obviously very strong, and Noah's had been improved by Planeshift as well, removal in the form of Strafe, and creatures like Horned Kavu, and Thornscape Battlemage.