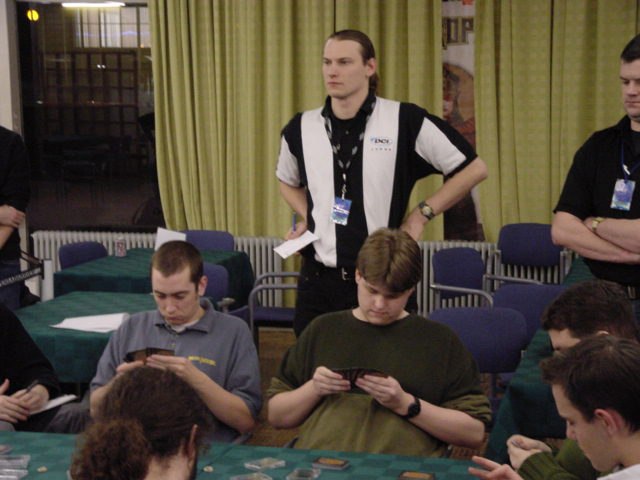 This was one of the strangest drafts I have ever watched. The card pool turned out to be incredible for the red, black and blue players, but this made those colors ridiculously overdrafted leaving many players disgruntled about their final decklists.

By halfway through the first set of boosters, there was only one green player, Antoine Ruel, and there were a string of four black players in a row just before him. Unluckily for Dan, he was number 4.

Booster 1: Razorfoot Griffin, Explosive Growth, Agonizing Demise, Samite Archer, Sparring Golem. Dan went for the obvious choice in the Demise, but to his left he was not to know that Brian Davis had picked up a Tsabo's Decree and Chris Benafel had picked up a Void!

Booster 2: Razortooth Griffin, Probe, Phyrexian Reaper, Assault/Battery, Rage Weaver, Opt. Talking to Dan afterwards, he really wishes he had picked the split card to make a green/black/red deck, but knows that the Probe was the right choice really in a usual draft. (He took the Probe.) Brian's picks were all blue, white and black, but at least his black was only a splash.

Booster 3: Glimmering Angel, Duskwalker, Plague Spores, Aggressive Urge. He took the Duskwalker over the Plague Spores as he knew he was going to be B/U, but was not sure about the red yet.

At about the fifth pick Dan started to notice the amount of green cards floating past him, and as there was nothing in the packs in his colors he actually drafted an Explosive Growth and an Aggressive Urge, but it didn't last through the second set of boosters as Antoine was sucking them all up. His playable cards for the rest of these boosters in his colors were: Opt, Darigaaz' Attendant, Vodalian Serpent, Cursed Flesh and Nightscape Apprentice.

From here on in, I will use CAPITALS to denote which card Dan picked of the remaining relevant cards. 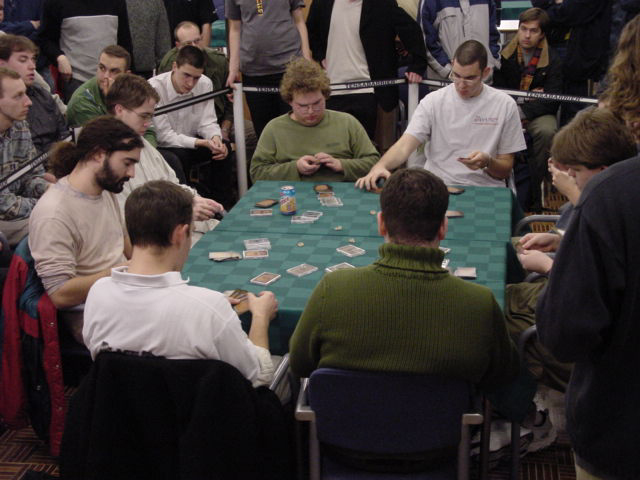 Then he managed to pick up Recover, Salt Marsh and a Traveler's Cloak.

The third set of boosters went dry, fairly quickly for Dan because he was at the end of a long line of black players. He took an Exotic Curse, Soul Burn, Recoil, Ravenous Rat, Shoreline Raider and an Urborg Phantom.

As I walked round looking at the finalized top 8 decks I realized that 5 out of 8 people were not happy with their decks at all - only Chris Benafel and Antoine Ruel thought they had great decks. Dan was not at all pleased with his decklist, but I think he will have the advantage on his first round opponent, as his deck is worse!

After the draft, Chris Benafel looke good for his first Grand Prix victory.