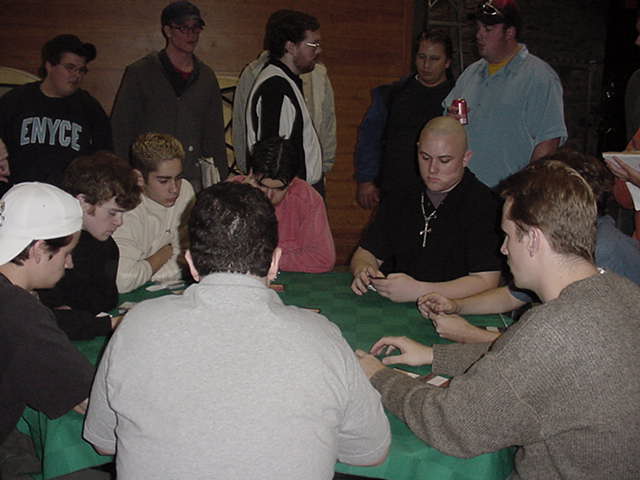 The top eight draft of GP Montreal featured 8 of North America's strongest drafters. The draft opened up with Dan Clegg in the 1 seat opening first. Hoping to play U-W Dan's first pick reflected this as he took a Hallowed Healer passing a few cards that were similar in qualitiy. However as the draft progressed it became apparant that this strategy would be far from possible, the 8 seat Louis Boileau put poor Clegg's first pick right into the abyss known as his sideboard by choosing to move right into B-W. After 5-6 packs Dan still hadn't fully locked into his colors yet. It wasnt until pack 7 did Dan finally decide on U-G, these were defintely the best colors for him as the two players sitting in front of him were (Louis) playing B-W and (Mike Turian) R-G. his deck turned out decent, however, not getting to decide on his color combination till pack 7 hurt.

On the other side of the table was Tim McKenna; Dan's first round opponent. Tim locked into R-G from the very start of the draft taking a Twigwalker with his first pick and opening an Overrun, from there he really never looked back as he took great cards such as: Elephant Ambush (3 to be exact), Flame Burst and Barbarian Lunatic. His deck is quite good, however, I think Dan has an edge in the matchup as he has alot of blue bounce cards (Dematerialize, Aether Burst) and nice array of fliers (Thought Devourer, Treetop Sentinel, Aven Windreader).

Sitting to the left of Tim was Bob Maher- deciding on U-W right from pack 1 Bob was flying all through the draft. sitting in seat 5 it seemed as though Bob never really got any cards hated from him. His deck is chalk full of great cards (2 Mystic Zealot, 2 Nomad Decoy, Shelter, Hallowed Healer). If Bob should get out of his first round matchup it is this reporter's belief that he could easily win his second GP title. The only problem with this is that his first round opponent Brett Shears drafted a deck to beat Bob and only Bob. featuring cards such as Execute (he is starting 2), Patriarch's Desire (2) and Hallowed Healer. Brett could easily get the draws to beat Maher.

In the 3 seat was David Rood, noticing that the drafter to his right (Shears) was looking to play U-W-B from the start Rood took G-R cards, this strategy seemed very good as both Clegg and Shears seemed like they didn't really want to draft either of these colors. However, the draft never really shaped up for him as no truely broken cards were passed to him (and got even worse when Clegg moved into Green). His deck is definately solid, however, it lacks the bombs that a truely great deck employs. His 1st round opponent Mike Turian however isn't lacking any of these type of cards; opening Shower of Coals and getting Kamahl, Pit Fighter (passed to him 4th), Turian could easily win this draft. His deck is both solid and aggressive and with two of the best power cards in the set he could even beat a more consistent deck like Bob Maher's if they were to meet (possibly in the finals).

The final set of first rounders, is the matchup between Louis Boileau and Peter Szigeti; these two both have very solid decks, Peter started drafting mono-black and moved right into blue once he realized that both drafters to his right weren't playing it. He has some great cards in his deck too (2 Aven Windreader, 3 Cephalid Looter, 2 Ghastly Demise) but he could have a huge matchup disadvantage because Louis's W-B deck has cards that Peter just cannot deal with (2 Whispering Shade, Cabal Patriarch) and Gravediggers (2) and Zombify to get these monsters back if there were to somehow die.

In conclusion, I see the quaterfinals finishing with Clegg, Turian, Louis and Bob winning.