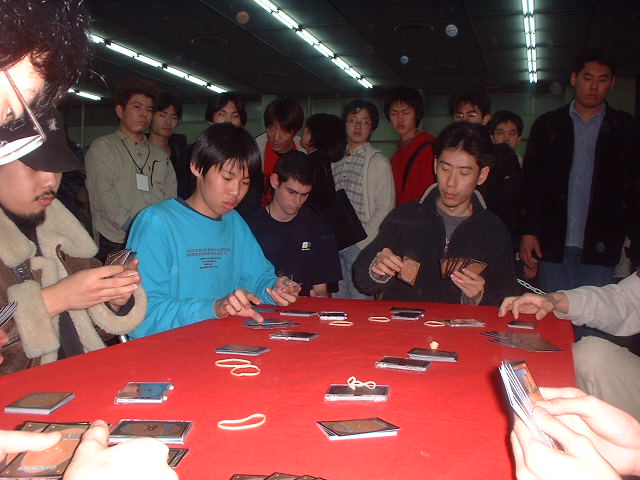 The finals of Grand Prix Hiroshima were Invasion booster draft and it was time to sort out the business end of the tournament. With over $9,000 up for grabs this would be the most important and toughest draft of the day.

1 - Toshiki opened Meteor Storm, Exclude, Sulam Djinn, Shackles and Obsidian Acolyte. This is a tough choice but I was not surprised when he took the Shackles from the controlling style of play that he adopts.

2 - A strong black/red pack is passed to him containing Phyrexian Reaper and Slayer, Scorching Lava and Shivan Zombie. Always the fan of removal, he takes the Scorching Lava.

3 - A really though decision has to made from this pack. He is presented with Repulse and Armadillo Cloak, both two of the most powerful commons in Invasion Limited. Toshiki takes his time with this one, pulling the Repulse out to start with but in the end going for the cloak.

4 - A mix of strong creatures makes up the next booster, with Hooded Kavu, Razorfoot Griffin, Pouncing Kavu and Galina's Knight being the options. Flying with first strike was the order of the day and a white deck begins to take form.

5 - The choice from this pack was relatively quick as the big fat Djinn with haste stands right out from the rest of the choices.

6 - This pack was light on quality with Simoon taken over Ruby Leech and Hypnotic Cloud.

7 - More was to be found in the seventh pack though, options being; Aggressive Urge, Hooded Kavu, Strength of Unity, Fertile Ground and Ardent Soldier. Mana utility was the call here, Fertile Ground the choice.

The remaining picks were:

After the first booster was complete, Toshiki was looking a white/green/red combination, while to his left Tsuyoshi Fujita had drafted black/red/blue and would be feeding Toshiki for the second booster. Two to Toshiki's right, Masayuki Higashino had drafted his favorite black/red/blue deck and to his immediate right Katsuhiro Mori was drafting blue/green/white. It looked good for Toshiki to be passed more powerful white and green cards for the second booster.

1 - The decision from the first pack was very hard with the options being; Tower Drake, Sulam Djinn, Pincer Spider, Scorching Lava, Pouncing Kavu and Smoldering Tar. The removal was once again too attractive to turn up and the Lava was taken. The Smoldering Tar is strong but it would have meant the addition of black to his deck, something Toshiki was trying to avoid.

2 - Pack two contained one of the most powerful Invasion limited rares, Armored Guardian. This guy can protect your whole army if you have the mana and with only one blue in the casting cost I am sure it won't be to hard to make allowances for this guy. The next best card from this booster was Benalish Lancer.

3 - Another Benalish Lancer was on offer here but the fat of Serpentine Kavu was a better deal, edging out the other contenders; Restock and Dismantling Blow.

5 - This pack was all about choosing between Kavu Aggressor and Aggressive Urge, the latter being taken.

6 - The sixth pack had white options for Toshiki again, Razorfoot Griffin, Benalish Emissary and Rampant Elephant, not really a hard choice with the Griffin taken quickly.

The remaining picks were:

After the second booster Tsuyoshi Fujita to the left has consolidated with black/blue/red and Mori to the right has a mix of black, blue, white, green.

1 - The final pack that Toshiki opened is amazing. It has Do or Die, Agonizing Demise, Spite/Malice, not to mention the Tower Drake, Nomadic Elf and Pincer Spider. I could see the pain in this decision making for Toshiki, but he finally settled on the Do or Die.

3 - With the strength and popularity of black in this format it is understandable that he would take Obsidian Acolyte from this booster. Other options were Recoil, Zap and Razor Tooth Griffin.

4 - Continuing with the anti black theme in this booster Llanowar Knight was taken over Angelic Shield, the only other decent card here.

5 - The fifth booster offered Strength of Unity, Zap, Faerie Squadron and Goham Djinn. The lure of more removal was enough for the Zap to find it's way into Toshiki's deck.

The remaining picks were as follows: