Baby Huey hasn't lost all weekend. After winning the first 11 rounds he took a couple of intentional draw and secured the #1 seed in the Top 8. Huey is one of the most respected players on Tour, but he hasn't actually won an event since the New York Masters Series last year. He was feeding Matt Vienneau during the draft and staring across the table at his quarterfinal opponent Dan Clegg. 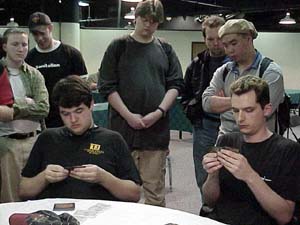 William Jensen drafts in the Top 8

Huey's first pack sucked: Recoil and Sparring Golem were basically the only good cards. Huey explained to me later, "I absolutely hate black/blue" so Sparring Golem was clearly the way to go. His had a lot of options in his next pack his first pick artifact creature meant his options were wide open: Pincer Spider, Glimmering Angel, Tribal Flames, Shivan Emissary, Vodalian Zombie. Huey knew Vienneau would draft that Recoil and be leaning black/blue so Huey was thinking green (and not black) would probably be best. He thought about taking Pincer Spider, but in the end he knew he vastly preferred green/red to green/white (telling me later "green/white just doesn't win") so he went with Tribal Flames. There was a lot of green in the next pack so his basic strategy seemed to be working out - he took Verduran Emissary over Harrow, Explosive Growth, Aggressive Urge, and not much else. His fourth pack had Fires of Yavimaya screaming "Hello!" at him. After that he took Razorfoot Griffin, and starting considering a white splash. Then he took Plague Spores and started considering a black splash. He thinks green/red is by far the best deck to run Plague Spores in.

Huey opened up his secondpack and couldn't hold back a sigh and a shoulder shrug - there was Dromar and he just could not play him. Feeling pretty good about the idea of splashing black even though all he had was Plague Spores, Huey took Smoldering Tar instead of the big dragon. Serpentine Kavu raced into his deck next, followed by a Benalish Trapper from a pack where I'm sure Huey would have settled for a weaker red, green, or black cad if there had been a reasonable option. Next came Kavu Aggressor and Pouncing Kavu, followed by Utopia Tree and visions of a four-color green deck.

Huey wasn't crazy about his deck going into Planeshift, but it got a lot better when his first for picks were Darigaaz's Charm, Terminate, Mirrorwood Treefolk, and Strafe. Matt Vienneau did a visible double take and looked over at Huey when he passed along a 6th pick Rushing River. (Huey had taken Quirion Explorer instead.) Huey just shrugged and drafted another Explorer, followed by a pair of Thunderscape Familiars, which gave his deck exactly the mana acceleration he wanted. Mana acceleration, Fires, and fatties - who would have thought that would be a good deck?! Vienneau wound up with a fine blue/black/red deck and he barely noticed when Huey started skimming the best black/red cards out of the packs. Huey steered both their drafts with his first two picks and they each look to be in good shape for these three playoff rounds.