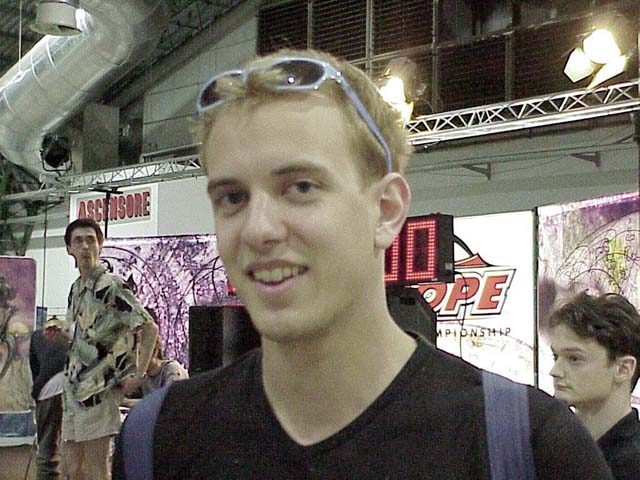 When you first look at Eivind Nitter you see the stereotypical twenty two year old Norwegian: tall, blond and reserved. As he waited for the Top 8 deck lists you could see a very different person with several emotions.

As everyone else he was glad the long day was finally over. Two gruelling days of Magic against Europe's best just to get a chance to sit out under the television spotlights can drain even the more resilient addict. But Eivind isn't simply glad, he is more than that, he is relieved.

In this European Eivind finally cracked. He finally put an end to a horrible string of second day chokes (including an European Grand Prix this year and a twenty third finish at Pro Tour Chicago). He continuously stormed out of the gates at premier events only to see glory slip from his grasp in the last rounds. His only exception was finishing in fifth at Grand Prix Göteborg a few months ago.

Again in the tournament he ran ahead of the field in the first day piloting his CounterRebels to a 6-0-1 finish. He is really happy with the deck and isn't afraid of his quarterfinal match up against John Ormerod's mono-blue Orb-Opposition deck despite the known dedication of the English to playtest the night away.

His second day started of in a less rosy way: he ended his first pod 2-2. He felt confident while drafting but ran into a bit of bad luck and made the wrong decision in a very tough mulligan.

So he went into the second pod at 11-2-1 so he need to start it off well. He sat down in a very nervous table with players having a very short fuse and it soon led into an almost all-out war. He managed to snatch a four color deck with no mana fixers. In his own words: "If I got the right mana I was ok but if I didn't I was in so much trouble."

He squealed out a 2-1-1 crossing the point threshold that allowed him to make the Top 8. He still couldn't really believe it. He walked around waiting for the Top 8 deck lists with an amazed smile.

"I have finally made it. It is so relieving to make the Top 8. I have been so close so many times. It feels great."