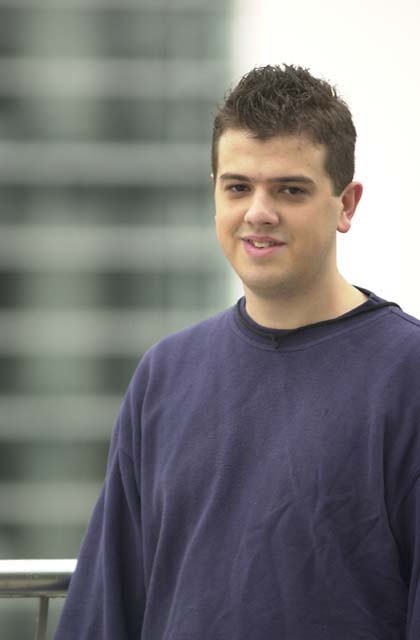 Portuguese National Champion Frederico Bastos has been playing Magic since the game first came to Portugal. His success here at Pro Tour Tokyo doesn't merely mark the first time that a Portuguese player has made Top 8 at a Pro Tour - it is also Federico's first time making Day 2. His final finish of 11-2-1 puts his right in the middle of the Top 8, playing against Pro-Tour veteran Zvi Mowshowitz in the first round.

"I didn't expect to make it here. I didn't feel so good about playing in a Constructed tournament because it is hard to find a real grasp of the metagame in Portugal. As I flew over on the plane, I kept worrying whether or not I had made the right choice with my deck."

He's not worrying about his deck choice now. The Black/Blue/Red Control deck that Bastos played was also played by another Portuguese player who finished 2-5 with a deck. "This kind of thing happens a lot. He played a lot of rough matchups."

Bastos deck runs two primary paths to victory: Urza's Rage and Pyre Zombie. The basic goal of the deck is similar to a Classic Counter-Hammer strategy: counter all of the threats that you need to and use other spells to "break" threats that get past your countermagic. In the late game, where a Counter-Hammer deck would begin reusing Hammer of Bogardan, Bastos' deck begins to bring back the Invasion Block version of Hammer: Pyre Zombie. In some cases this recursion wouldn't even be necessary, and Bastos won more than a small share of games by using Undermine to diminish his opponent's life, and then Urza's Rage for the finish. His recursion makes him very good against other control decks, but his deck can be slow starting.

"I'm very good against other control decks. Red/Green decks, especially if they are very fast and run Blurred Mongoose, they are very difficult to beat. My two match losses in the Swiss were against Red/Green, but I also beat it twice."

One of his major strengths against other control decks comes from his choice for control cards. While he does run two Terminates, the rest of his deck couldn't be more optimized against a creatureless or creature-light deck. All of the rest of his creature control can be a nightmare for a control deck. Urza's Rage and Pyre Zombie are essentially almost impossible to stop. Spite/Malice can work as creature-control, but against a control deck, the versatility of the spell as a counterspell gives him more weapons to fight with. Recoil and Void can also both punish control players, as well as being good against beatdown. While a lot of his choices can make him less ready for a Green/Red beatdown deck, his deck is very ready against any slower deck.

Bastos appeared somewhat confident about his chances. He plays against Zvi Mowshowitz's Blue/White control deck in round one, and if he wins, will play against one of the four AlphaBetaUnlimited.com Green/Red decks. "I have the right tools. I have Recoil and Void, and I think I have a good chance. If I go on to play one of the Green/Red decks, it all depends. It's not unwinnable."