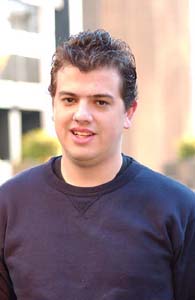 With exactly one previous Top 8 to his name, Portugal's Frederico Bastos is one of the veterans of the bunch. Of the other seven, only Andy Wolf has ever been in a Top 8, and only once as well.

The 24-year-old won't come out and say that he is his country's best player, but results don't lie - no other Portuguese player has cracked the illustrious Top 8, and Bastos now has two (his first was in Tokyo). When asked about his success, Bastos deferred to his playtest partners back home - Rui Mariani, Filipe Girao, Helder Coelho, Hugo Machado, and Luis Sousa. With Frederico, that list comprises all of Portugal's top talent, so it is safe to say that Bastos practices against top competition.

All of his practice taught him to respect the obvious archetypes of red/green, blue/white, and blue/black. But when push came to shove, he went with red/green, drafting that combination in four of the five drafts.

As he did in the Top 8 draft, Bastos claims that he will often switch into green early if he opens or is passed an Overrun. "You have to. It's far better than Shower of Coals." Bastos believes that red/green is so popular and so good because it gets all the best uncommons, and his first draft deck with Overrun and 2x Shower of Coals was indicative of that.

Unfortunately, Bastos lost to Don Gallitz in the first round. "I was looking to make it past the quarterfinals," he lamented.