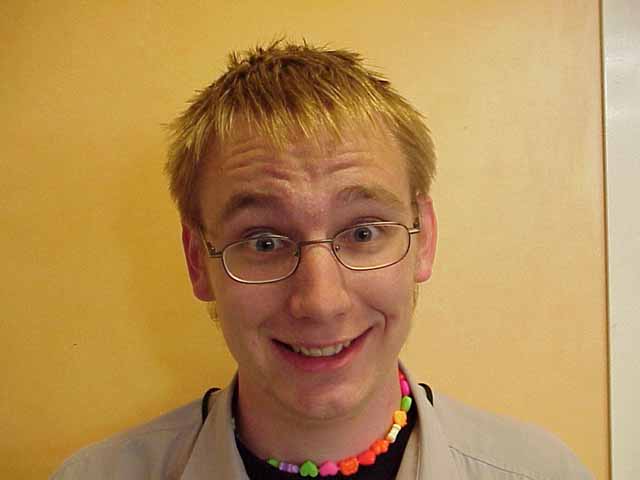 When Johan Franzén came to the 2000 European Championship, his goal was to make top 64 so that he would make some money. The 20 year old Swede ended up making money, but a lot more than he had expected. After finishing in the top 8, Johan will take home at least 2000 dollars. Not bad, considering the fact that he didn't playtest at all.

"I didn't feel like testing, because I hate Type II. Draft is the only thing that is fun," Johan says. He came to the tournament without a Standard deck, so Friday night, he searched through his friend Micke Magnusson's cards to see what deck he could possibly make. "Ponza was the easiest deck to build, and I expected a lot of green."

Johan's start of the Standard portion was somewhat disheartening, though. He got a game loss because he was late - he was buying sideboard cards in the card stand. The cards he bought were four Rack and Ruins, the only good option he could find as he knew that fellow Swede, Jens Thorén, played a lot of artifacts. Jens wasn't really happy about that when the two of them met, because Johan won and knocked Jens out of contention for top 8. "I'm splitting the prize money with him," Johan reveals, the two of them chose to do that when they met late in the Swiss. So at least his friend won't leave empty-handed.

The player from Västervik in Sweden lay the foundation for his top 8 during the draft portion of Euros. Johan went 2-1 in the first draft, playing a black and white deck. Then he drafted a really weird collection of spells. "I played black and blue land manipulation," Johan explains. "I took a Port way too early, as my fifth pick, and I had two Rishadan Footpads. Then I got a Despoil, a Rain of Tears, a Daze, a Spiketail Hatchling, a Thwart and a Stinging Barrier, and I had three Coastal Hornclaws. One of them went all the way around the table to get back to me. I could have played two Brainstorms, but I liked the concept. Despoil won me many games," Johan says.

Since Grand Prix Stockholm, Johan has worn a clown nose while playing. He doesn't really know why he started, and now it is just a habit. Perhaps you could call it his lucky charm, because Johan wasn't qualified for Worlds before the Euros and he was happy to earn a slot. Anyway, he will need all the means of distractions he can muster when he faces Raphaël Levy in the quarterfinals. "Levy?" Johan sighs and hangs his head in resignation. "Really?" When the papers tell their tale and confirm that Johan is indeed playing against Replenish, he doesn't really feel optimistic before the playoff. "I'm going to lose. I lost against him in the Swiss, and I don't think I have a chance at all," he says.

Johan was still happy in spite of the prospect of losing in the quarterfinals. "I think Rickard Österberg will win, he is playing blue," he says, rooting for the fellow Swede. In addition, he doesn't mind that the Norwegian dominance of the Euros has come to an end. "A curse is broken," he proclaims, "and the Swedes will take over."