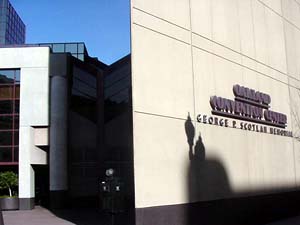 For a Grand Prix Top 8 this was a good draft table even by Pro Tour Standards. Michael Turian set the standard by going undefeated on the weekend with an 11-0-3 record. He was hoping to erase the sting of his early Top 8 exit in Amsterdam. Right behind him in the standings were a pair of unfamiliar names-but not completely unfamiliar. There was not a single amateur status player in this Top 8.

Former JSS standout Mitchell Tamblyn and easy going Ian Spaulding are both fixtures of the Californian PTQ circuit. They may not be as well known as the other six players but when their names were called out they were cheered as loudly-if not louder-than everyone else.

Ben Rubin was looking to win back-to-back Grand Prix after his win in Anaheim. He professes to be a more casual Magic player these days. If this is casual, Kai Budde had better hope he never buckles down and gets serious.

David Humpherys recently took a position with Upper Deck Entertainment and there was some concern that having another game require his concentration would pull him away from competitive Magic. As the original YMG team is in turmoil Dave Humpherys is still going strong.

Paul Rietzl shares Dave's YMG lineage and was playing in his second Grand Prix Top 8 in as many tries. It was not too long ago that Rietzl's Magic future was in doubt as moved West to attend school and found himself chasing after qualifications on the PTQ circuit.

Ken Ho was playing in his second Grand Prix Top 8 of his career. He is no stranger to success though as he made a Top 8 at a Pro Tour and has done well on the Masters to boot.

Gabe Walls is the black sheep of the YMG family. He is no longer a member of the team and was going to be pitted against Dave Humpherys in the fist round of Top 8 action.

Stay tuned for draft coverage, the contents of the packs each player opened, and all the action.