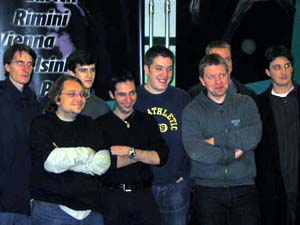 The grueling hours of competition are almost over as the largest Grand Prix in history heads towards the final match. It's been a long and difficult battle - where there were once 1353 players all hungry for victory now there are only eight determined players who are ready to test their mettle and claim their rightful title as Champion.

It's a chance to start clean for these top eight players as the decks that brought them success this far will have to be retired and their ultimate fate will depend on what this new draft will bring them.

With more than 17 hours of official playing time yesterday followed by more than 12 hours already today, caffeine is a player's best friend as the most crucial decisions of the tournament await. Whoever keeps a sharp mind and doesn't blunder will be rewarded with a victory as the sandman tries his best to force mistakes and the long hours of competition start to break down the most precise of strategies.

We're bringing you all the action as it happens on the tournament floor, so keep your browsers right here.