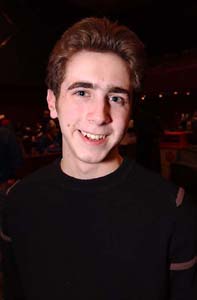 Have you seen those pop-up advertisements for the Junior Super Series on Starcitygames.com and Brainburst.com? They show you a former Junior Pro Tour or JSS competitor who has gone on to Pro Tour success, like Jon Finkel or Chris Benafel. Well, after today, you can add Jeff Cunningham to that list.

Cunningham, an eighteen year old film student at York University at Toronto has been around the game for a while, working his way up from the Juniors to the big leagues. He came in 11th at JSS Worlds in 99, and then got to the Pro Tour, placing Top 32 at Pro Tour Chicago 99 and Top 32 at Pro Tour Barcelona, in addition to a fifth place finish at Canadian Nationals 99. Now that he has a Pro Tour Top 8 under his belt, Cunningham has brought his game to yet another level. Just like Finkel and Mowshowitz, he is now another example for younger players who are looking to start their Magic careers at the Junior level, and work their way up to Pro Tour success.

Where tournament preparation is concerned, Cunningham got ready by testing with some of the best. "I drafted a lot with Gab Tsang, Ryan Fuller, Terry Lau, and Jeff Fung when I was in Vancouver". He came to San Diego with a specific strategy in mind." I tried to go black/blue every time. I went black/blue every time (in the Pro Tour) except for one draft where I went white/blue with a splash of black for Psychatog and Shadowmage Infiltrator, which was pretty tight." Why force black/blue? "I think there's a lot of underrated cards in the color combination. Psionic Gift always goes really late, and so does Last Rites. I think they're both always good cards. Plus, the colors are so deep that you can always make something out of whatever you get." It wouldn't be surprising to see Cunningham try the same draft strategy in the Top 8, since it certainly worked quite well.