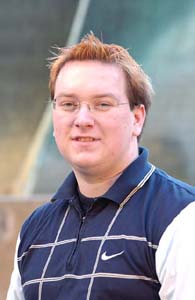 When I walked around the tournament area during the first day of the Pro Tour doing Quick Interviews, one of the questions was "Who do you think is the most underrated player?" Almost every European answered Jens Thoren. After this weekend and a second place finish, it seems that the rest of the Magic community will now know just how good he is.

Thoren, a 22 year old student from Sweden, has had a few solid finishes in the past, most notable of which was Top 8 at European Championships. His strategy going into the tournament was to "Draft blue, green and black. Some combination of those colors." I wondered which cards he preferred to draft, and he simply answered, "Rabid Elephant. I like that card a lot." After making the Top 8, Thoren wasn't incredibly inspired by taking a Pro Tour championship trophy home to Sweden. "I just wanted to win my first match, I really didn't have any expectations." Unlike the swiss rounds of the Pro Tour, the Top 8 players know exactly who their first round opponent will be, and can draft their deck accordingly. "I chose my second color to have a chance in my first match." But why draft green/white, a color combination most players avoid like the plague? "I started off in green, but my opponent picked up Second Thoughts and Healers, and I wanted to go into white to get some Shelters."

As far as preparation is concerned, Thoren has surrounded himself with good company. He is a member of Team Punisher, which includes Johan Sadeghpour, Mattias Kettil, Tomi Walamies, Anton Jonsson and Mattias Jorstedt. "We draft a lot once a week and I played a lot of Magic Online." It obviously paid off, as Thoren was able to reach the finals with a deck archetype most players avoid no matter what. It's safe to say that Jens Thoren is no longer "the most overrated player". He has arrived.