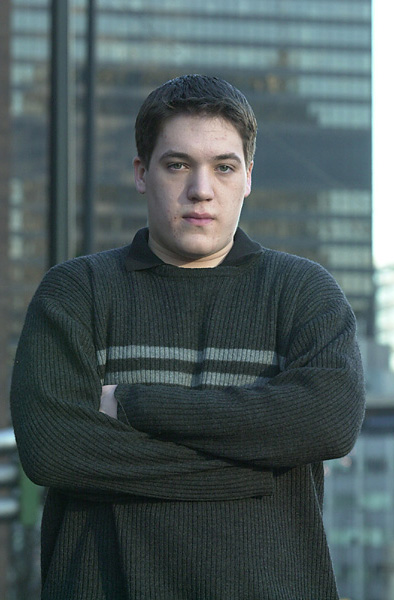 Kai Budde came to 2000 Pro Tour Chicago directly after making Top 4 in Grand Prix Florence. But in between, he managed to wash his favorite gray striped sweater so that he could bring it to Chicago as well. "It worked in Italy and it worked here," Kai smiles, on the roll again after a year with rather mediocre results.

The 21-year old player from Hamburg, Germany took his mono-white rebel deck to a respectable 11-2-1 finish and went into the playoff as the first seed. "We practiced for about two months," Kai says. He and the rest of the English/German team came to the conclusion that there was no single best deck, and so most of the team members chose decks according to their preferences. "The other alternatives were blue/white control and Fires. I'm not much of a control player, and I'm not the guy who drops green creatures - so it wasn't much of a choice for me," he says in his charming, German-English accent. "I want to put pressure against the other player as I usually have the wrong answers."

Budde's rebel deck beat almost anything than Fires of Yavimaya. The German's two losses in the swiss came when he faced Brian Selden and Mike Pustilnik. "We use four Brushland against Flashfires, and so we use Wax/Wane instead of Disenchant. Actually, I won a couple of games with the Giant Growth," Kai recalls. "The most valuable card was probably Rebel Informer. Otherwise you just can't win the mirror matchup."

He was quite happy about his deck choice, and it seemed to have been an overall strong deck as all the players who chose it made the second day, with the exception of Dominik Hothow. Kai had to cross some hurdles before making the Top 8 though. With one round to go, Budde had 31 points, but his tiebreakers were so low that he had to play his final match in order to make the cut. "It was very annoying. You're almost always guaranteed to make Top 8 if you are at 31 points before the last round, but Alex Shvartsman decided to concede to Zvi Mowshowitz, and if I had ID'd, I would almost definitely end up ninth," Kai says.

So he had to play against Arto Hiltunen, and he was very nervous - much more nervous than he figured he'd be in the playoff. But once it was all over, he was just happy. "I'm relieved," Kai admits. "But I didn't expect it. The deck is good, but not great for the field. I expected a lot less rebels, and we tested against basic Fires. People have Tsabo's Decrees in the sideboard, and that is not very good for me."

Still, Kai will return to Germany with at least $9,000. And he doesn't expect to win. "Kibler will definitely beat Mowshowitz, so if I win the quarterfinals I shouldn't beat Kibler. I don't think I can beat an aggressive deck with Tsabo's Decrees. But I'll be very happy with 5th if I should lose," the former World Champion smiles.