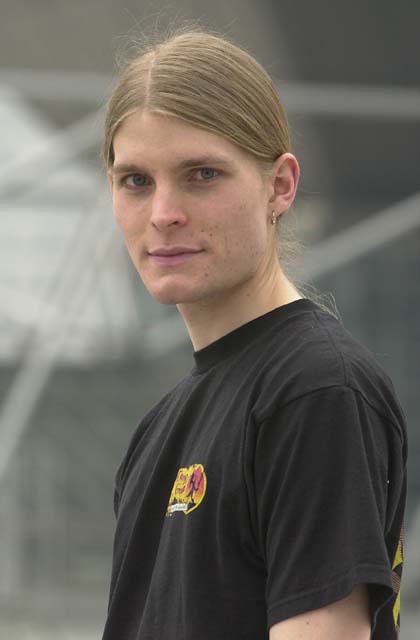 Lucas Hager is not only a Magic player who has just made his first Top 8 performance. He is also a successful violin player. "I think I'm the only violin-playing Magic player. I'm certainly the best," he laughs. And the experience from playing the violin at a high level has helped him excel at Magic. "Playing at a high level of Magic is kind of similar. There are skills that are applied to Magic as well, for instance nerve control."

21-year-old Lucas' best performances before Tokyo were winning the 2000 South Carolina State Championship in addition to finishing eleventh at 2000 Pro Tour Los Angeles. "Chris Benafel edged me out on that one," he smiles. For Tokyo, he playtested with Benafel, and now, the two of them both made it to the Top 8. Lucas even had a feeling that he'd do well. "This will sound funny, but during my Christmas break I had a dream about myself doing pretty well in Tokyo. So I tested strongly, and I felt very confident," he says.

Initially, his goal was making Day 2. After going 4-3 the first day, he didn't expect to make the Top 8, so then his goal became making the Top 16. But Lucas went 6-0, and could draw into the Top 8 as the seventh seed. "It's exciting," he admits. "I think the Top 8 finish shows me that I can compete with the best in the world and that I can win. I've always felt like I had the potential, but I this kind of confirms it for me."

As a member of the AlphaBetaUnlimited.com playtest group, Hager chose to play red/green beatdown, just like Ryan Fuller, Benafel and Phil Freneau. In the quarterfinals, Hager will face Freneau, and the two of them have almost identical decks. Still, Hager is confident. "I played five mirror matches today and won all," he reveals, admitting though that it comes down a lot to the draw. But Lucas feels that his mana base is a little better. "He has a fourth Ghitu Fire and a fourth Thornscape Battlemage, I have one extra land and a fourth Kavu Runner. But it's as 50/50 as it can be."

Lucas started playing Magic when Mirage was the most recent set. His younger brother Timothy used to play with his friends, and one day, Lucas was bored and asked them to show him the game. The rest of the story is similar to the stories of so many other players; he started buying cards and got more and more into the game. Eventually he started playing tournaments, and in 1998 he qualified for his first Pro Tour. Since then, he's been qualifying sporadically. His strength is that he as a very good grasp on when to be defensive and when to take the aggressive, a quality to which he owes several other games.

Thanks to playing the violin a lot for an audience, for instance in a statewide competition where he finished second, Lucas isn't nervous before the playoff. "Magic players and musicians are all actors when they are on stage or when they sit down to play a match," he muses, and adds: "I've already done great. I'm happy regardless. But that doesn't mean that I won't try to win!"