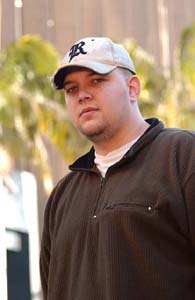 Arkansas in general has never been considered a den of Magic talent. But don't tell that to Neil Reeves. The 23-year-old has put Little Rock on the map with this, his first Pro Tour Top 8.

Reeves cut his teeth in the southern PTQ circuit with players like Doug Tice and David Williams. Most of him play skills, however, are self-taught. There is no group of local professionals near him, no established team, nothing. He'd get his matches in at the Family Game Center in Little Rock, but always knew he wanted to crack the big-time.

"I was two-time All-State at football and baseball, so when I started playing this game, I knew I wanted to be the best at it, too."

Reeves had been to a handful of Pro Events previously, but always missed Top 32 by a hair, including 33rd and 34th place finishes in the last calendar year.

His name was put into the spotlight recently, however, when he qualified for the Masters Series in New Orleans on rating. Many players wondered who he was or where he came from, but veteran Bob Maher will testify to Reeves' skills.

Reeves isn't thrilled with his chances in the Top 8 now that the draft is finished. "I was in the right position for my colors, but the packs didn't work out." His card quality is a little weak, but his ability may be enough.

In any event, get used to the name Neil Reeves.