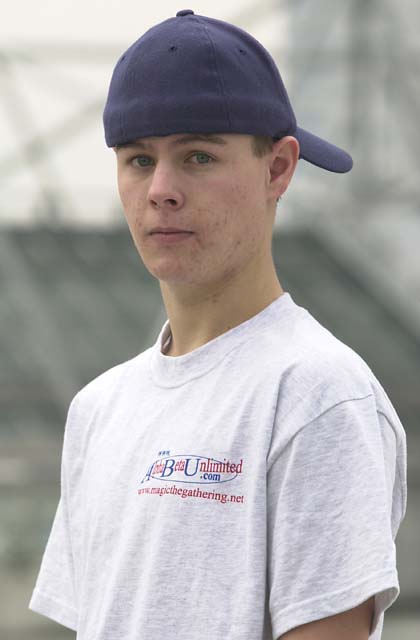 "This tournament has been really good. Just pretty much everything has been working out, like, I've been getting good draws and my opponents haven't," Phil Freneau says. In his fifth Pro Tour, the 17-year-old broke into the top, entering the playoff as the second seed.

Phil, hailing from Crescent City, California, was one of four players in the Top 8 that belonged to the same playtest group, AlphaBetaUnlimited.com. They all played virtually the same deck, a red and green beatdown deck. "I really like the deck," Freneau says. "I don't think it really has a bad matchup. So you go into every round not worried what you'll be facing. And it's nice not playing control. In Chicago I played control, and that was just not very much fun," he smiles.

Before Tokyo, Phil's best Pro Tour result was finishing 76th in Pro Tour London. Other than that, he made Day 2 in 2000 Pro Tour Los Angeles, and he also had a few high finishes in the Junior Super Series. Still, he went into the tournament with high expectations. "I worked a lot on the deck, and I played so many matches. I felt confident. I think a lot of people underestimated the red/green deck. It's just very good," he thinks.

Ryan Fuller went undefeated through the Swiss playing the same deck, and in the last round, Freneau lost against the Canadian. "Only about five cards are different, and then the sideboard. He has two more two-drops, and only two Jade Leeches," Phil explains. Phil was also the only one who didn't play Overabundance at all. "I just don't like that card," he admits. "In half of the games you play it, you'll win, but in the other half, it will cause you to lose. It helps if you're already winning, and I'd rather have a threat. Besides, it's really bad in the mirror."

Freneau considers himself stronger at limited than at constructed, so his expectations for Tokyo were merely to make the Top 32. But of course, he is quite happy about making the Top 8. "It feels really good knowing that I'll be qualified for a while now. To go to qualifiers, I have to drive for seven hours."

Phil started playing Magic right before Ice Age. "A friend had some cards; he showed them to me and I got hooked. The strategy and the logic are really fun. I think you have to have a lot of logic to do well," he explains. Phil's strength is that he is pretty flexible and he can play almost any deck. Earlier, he has lacked some confidence, but he's getting over that now. "This weekend pretty much put an end to that," he grins. Phil has ambitions before the playoff. In the quarterfinals, he faces Lucas Hager, who is playing very much the same deck, but Phil reckons he can win. Phil isn't even worried about possibly having to play Ryan Fuller, although he lost to him in the last round of the swiss. "I think I'm gonna win. My sideboard is better, and we have to play best three out of five," he smiles.