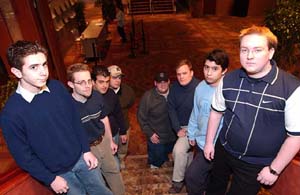 Which of these eight men will win the Pro Tour?

Jon Finkel and Kai Budde will be watching this one from the sidelines. In fact, most of the established pros you've heard of are nowhere to be seen in this top 8. Instead, it features a fine mix of newcomers, pro players who are fighting to remain on the gravy train, and the veterans who finally broke through.

I talked to a number of well-known Pro Tour personalities, asking them to make predictions as to who is going to win on Sunday. Here is what they had to say:

Gary Wise: Jens Thoren. He is the most established player in the top 8.

Zvi Mowshowitz: Given the way Odyssey draft works it is all about which player will end up sitting in the best position. If I had to pick one player though, it would be Eric Froehlich. I don't know the top 8 players too well, but based on his reputation and what I know about him, I think he can win.

Eivind Nitter: Jens Thoren. He is always the number one choice as a money draft partner, an excellent drafter.

Chris Pikula: Andy Wolf. He has got the most experience out of the eight, and he had the best performance on day 2.

Bob Maher: Neil Reeves. He is a phenomenal drafter. I've never seen him do worse than x-1 in any draft.

Kai Budde: Jens Thoren. He is the most experienced player in the top 8. If he does not win, Eric Froehlich will.

Jeff Donais: Eric Froehlich. He is the best player in this top 8.

Justin Gary: Donnie Gallitz. He is a very solid player. Also, he beat me, so he must have some skills.

I have an advantage over these other guys as I make my prediction after watching the top 8 draft on Sunday morning. My opinion is that Farid Meraghni is going to win this Pro Tour. Despite playing Magic for only about nine months and attending only one Pro Tour previously, he played well during the weekend and he drafted a monster of a red-green deck that very well might carry him all the way to the top.