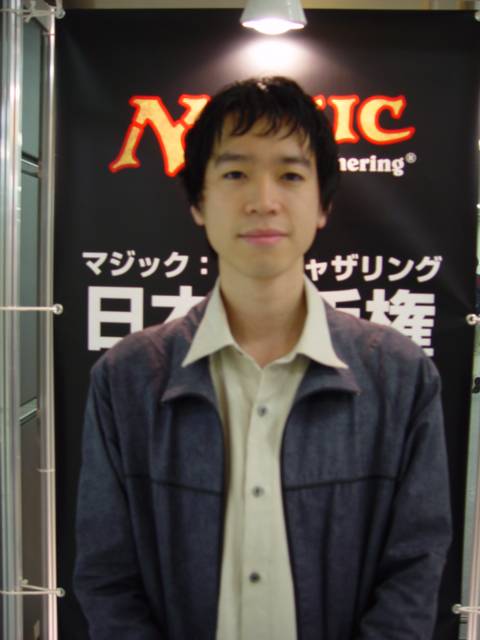 Posting a 5-1 record in both the Standard and Limited portions of the event, Okamoto leads the Swiss standings going into the Top 8. Still, even though he's actually been in the game for a long time, most people following this weekend's coverage have probably never heard of him.

Okamoto started playing with Homelands. Until now, his best performances have been the 1999 Japan Open, where he took 3rd place, and qualifying for PT Los Angeles 2001. He has the same background as many of Japan's other top players: rather than suddenly burst onto the scene, he has been playing for several years, patiently practicing and waiting for his big break.

Okamoto is a regular at Top Decks, a card shop in the Nihombashi area of Osaka. A respected member of his playing community, several of his friends came up to him during the interview to congratulate him. He is also friends with Shuuhei Nakamura, captain of GP Nagoya Finalists "Team S.S.D."

Okamoto has chosen to go with monoblack control, with some interesting metagame choices. Running no creatures, he relies on hand destruction and creature removal in the early game, then abusing Cabal Coffers in the late game to generate obscene Soul Burns.

When asked what he would do with the prize money if he won, his friends shouted out in unison "Open his own store!" Okamoto's gentle laughter and shrug showed that he himself didn't think that was a bad idea.