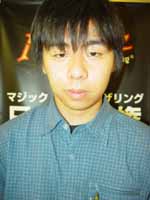 This is the second year in a row Ootsuka has made it to Day 3 of Nationals, and is the only repeater from last year. Last year, he lost in the Semi-Finals. Will he be able to avenge that defeat and take a berth on the National Team in 2003?

He certainly hopes to. Teaming up with the reknowned Jin Okamoto, Takashi Okura, and Ryouma Shiozu for playtesting, this Nagoya-based player has chosen a UG madness deck, adding black for Zombie Infestation and creature control.

Ootsuka has had a number of respectable finishes over the last two years, finishing in the Top 8 of Nationals, and winning the Big Magic Cup, also known as the "Rebecca Cup" in Japan. (The Big Magic Cup was held in August last year at Big Magic Osaka, and earns its nickname from the fact that Rebecca Guay attended as a special guest. Over 300 players attended, including many pros such as Tsuyoshi Fujita and Katsuhiro Mori.) Although his best finishes have come in the summer, he also placed 9th in the 2000 Finals, and 17th in the 2001 Finals. (Translator's Note: The Finals are the big year-end tournament alluded to in Gary Wise's "Wise Words: Japan" article. The event takes place on December 30-31 every year. The format of the event is Extended and Standard, and has a total prize purse of 1 million yen, or approximately $10,000.)

What's notable is that all of Ootsuka's wins have come in Standard events. Since that is generally regarded by most pros as their weakest format, it may give this Standard specialist an edge in the finals this weekend.

Ootsuka is easily recognizable at an event: he always wears a t-shirt with the green mana symbol on it, which has been his trademark since the Big Magic Cup event.

For last year's Nationals, he fielded a UG madness deck with a touch of red. This year, he is using a similar build, replacing red with black. When asked why he chose this deck, he replied "I like green", and "Wild Mongrel is the best card ever—I've been using it ever since Odyssey was released." His love for and faith in green appears to have rewarded him this weekend, as he posted a 5-1 finish in Standard.

As for his draft strategy, he says he basically went with the flow, picking cards based on what the rest of the table was doing, rather than sitting down with any particular intent or desire to force certain cards or colors. In the 1st Draft, he went 1-1-1 with a green/blue/red deck, doing better in the 2nd draft with a 3-0 green-black construction. As one can see, in spite of his declaration that he wasn't going to draft a particular color, he still ended up staying with his favorite color.

• With A Little Help From His Friends

When asked how he felt on making Top 8 two years in a row, Ootsuka told us that he owes it to "All the draft practice that Yamazoe and everyone else in Nagoya helped me with. I couldn't have done it without them."

When asked about Ootsuka, his playtest partner Ryouma Shiozu had this to say: "He can be a little flighty at times, but when he's on his game he's really good. I expect him to go all the way this year, because he really wants to prove himself, so he's really focused."

We'll see if Shiozu's prediction bears out on Sunday.