• The Fires of Youth 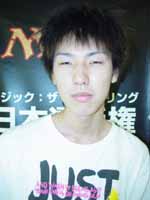 All of 16 years old, Nao Atsuta is still a high school student. He started playing Magic during Mercadian Masques, when he was still in junior school. A rising star from the newer generation of players, Atsuta usually plays near his home in Hachiouji with Akira Asahara and Kazuhiko Arahori, or in Ikebukuro with Akihiro Takakuwa. Practicing with these established Japanese players appears to have paid off for the young Atsuta, as he played in both last year's Nationals and the Finals, and qualified for this year's Nationals by taking 3rd place at the Kantou Nationals, out of a field of 700 players.

Used to playing 4-person drafts, Atsuta says he practiced Rochester draft at least once a day after qualifying. The results of such persistent practice were clear on Friday and Saturday, as Atsuta went 2-1 with a blue-red build in the first draft, improving to 3-0 with a white-black deck in the second draft.

While practicing, Atsuta said he realized the power of blue and made a point to keep track of where the blue cards were going, paying special attention to who was drafting blue-green and blue-white. He credits his success in the draft portion of the event to being able to read other players' signals and draft cooperatively.

While he worked hard to prepare for the Rochester draft portion of Nationals, Atsuta left the deckbuilding to others. The Steroid deck he used in the Standard portion of the tournament was actually built by Asahara, who gave it to him the night before the event. "With Asahara building a deck for me, I felt I didn't have to worry. I trust his intuition about the metagame", says Atsuta.

Although he rode a Steroid deck into the Top 8, Atsuta admits he's actually

more of a control player. He readily admits that he has a lot to learn, and plays more to have fun than out of a burning desire to win. When some play mistakes he made were pointed out to him, he just shrugged.

When asked about which decks gave him the most trouble during the Standard rounds, Atsuta told us "Green decks with Wurms". Unfortunately for Atsuta, his first Top 8 opponent is Tooru Maegawa, using a Verdant Succession deck. Will Atsuta be able to overcome his fear of green and win a seat in Berlin? Find out as the Sideboard continues to bring you coverage of the 2003 Japan National Championship.