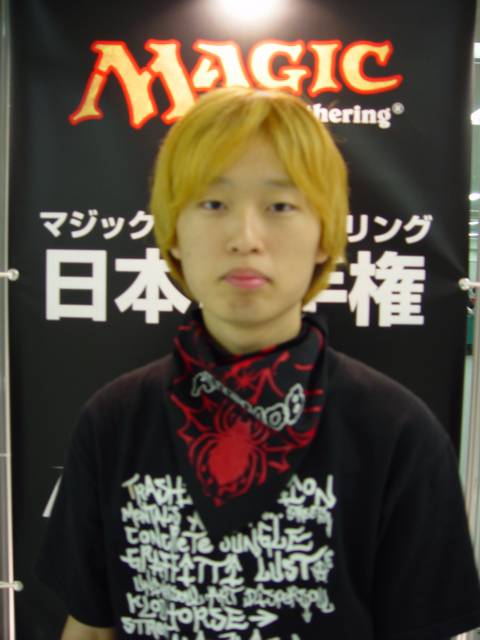 "I want to win—not just for me, but for Morita." Nakano's first comment in his interview shows how much he thinks of his close friend and playtest partner Masahiko Morita. Going 5-1 with his anti-blue metagamed Steroid deck, Nakano posted a 4-1-1 finish during the draft. The draw came from an ID with Morita. At the time, both thought they would meet in the playoffs, but it was not to be, as Morita went on to lose the next round.

Called "Skirge" by his friends in Osaka, he cites the friendships he has made with players like Morita as the best thing about Magic. He explained that he wants to win on Sunday not just for himself, but for all his friends who have helped him get there, among them Masashiro Kuroda, who designed the Steroid deck he played, and Tusyoshi Fujita and Masahiko Morita, who helped him tune it.

A regular at the Osaka card shop Adept, Nakano has many stories about the hijinks he and his friends get into there. Although he, like any serious player, wanted to win a title someday, it wasn't as important as having fun with his friends—which is why the announcement of Adept's closure came as a shock to him. "I was ready to quit Magic," he says. Losing his motivation, he was planning on making the Osaka Regional his grand finale, but ended up winning a slot in Nationals. He figured since won travel money to Tokyo, he might as well go. "I didn't even bother to practice drafting with Judgment" he says.

As with Eviend Nitter and Jin Okamoto, the universe had some surprises in store for Nakano. Managing a 5-1 finish on day 1, Nakano drafted his way into the Top 8. Asked to explain how he did it, all he could say was "I guess I just got lucky. Maybe I was meant to win today," then shared a laugh with his friends from Adept. Tsuyoshi Fujita, Masahiko Morita, and Masashiro Kuroda are all familiar with that feeling, and they're glad Nakano's turn has come around at last.