• King of the Grinder 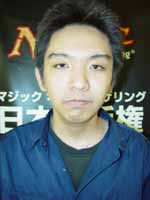 As the names of the Top 8 began to fall into place during the last round of Swiss, spectators and players began looking over the standings to see if their favorite player made it in. Around the room, the same question could be heard repeated over and over.

Although he is a complete unknown, this 19-year old, participating in his first Nationals event, gave a stellar performance. Grinding his way into the event on Thursday—no mean feat in itself—he posted an undefeated record through the 10th round, going 9-0-1, becoming the first player to grab a seat in the Top 8.

Yamamoto has been playing Magic since the Artifact Cycle (or the Urza Block, as it is sometimes called). He is a regular at the Lord of Magic Convention, Chiban Dragon, and Master of Magic tournaments in his home city of Chiba, an hour east of Tokyo. When he's not attending one of those events, he's playing Magic Online.

Calling himself mainly a Constructed player, he tells us he has recently started practicing drafts online. His only practice for Rochester draft has been online, although he says he's only played that format once (!). While Scourge is still not available in Magic Online, he says he was still able to get a good enough feel for the format to do well this weekend. Believe it or not, this weekend's tournament was his first real-life draft.

This is probably a premonition of the future: as the use of Magic Online spreads, more and more players will use it to practice for major events, leading to an increase in the number of relative unknowns who explode on the scene to dominate high-level play. Clearly, a new paradigm is being created by the expansion of Magic into the digital arena.

Although a regular at local tournaments, this year's Nationals is Yamamoto's first appearance at a major event. He says the Psychatog deck (containing Standstill) that he used to win the grinder was something he "threw together" for playtesting the day before. He switched to a more traditional Psychatog build with Concentrate for the main event.

During the first draft, Yamamoto ended up with a red-white deck, and went blue-red in the second draft. While practicing, he came to feel that white-black or white-blue are the best color combinations, but says he wasn't able to pull them off during the draft. Still, he wasn't disappointed with his picks and felt his draft went well.

During the Swiss rounds, he tells us that most of his opponent had to mulligan at least once, and he often won through topdecking. Ever dog has its day, as the saying goes, and it certainly seems to be Yamamoto's day. During the interview, he kept repeating "I can't believe it, I can't believe it" when asked about his performance. We'll see if his luck can carry this wünderkin all the way.