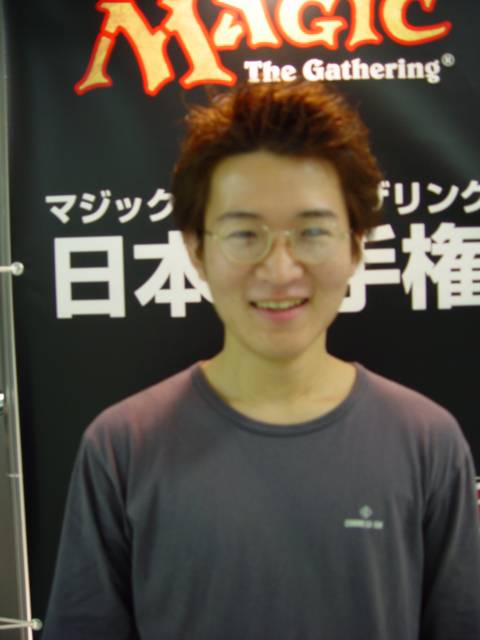 You may think you know Yuuki Murakami, but are you sure?

Regular readers of the Sideboard have probably noticed that there are many top players with similar or even identical names. There are several "Fujitas", a couple of "Moris", and plenty of "Tsuyoshis", mixed in with two "Nakamuras".

When the Top 8 was announced, many people assumed that the Yuuki Murakami who would be playing on Sunday was the same Murakami who played against Tsuyoshi Fujita in the finals of GP Kyoto two years ago. That Murakami, from Osaka, declined to attend this year's Nationals. This Murakami is from Sendai, a teammate of Yuusuke Sasaki (also from Sendai, and not to be confused with the Yuusuke Sasaki recently suspended for bribery at GP Nagoya).

Murakami has made to the Top 8 with the help of a variant on the popular Psychatog deck seen everywhere this weekend. He expects it to do well against the players he'll be facing in the playoffs. "Like everyone else, I figured Psychatog is the best deck, which is why I used it for the base of my deck. Like I said for the Quick Interview the other day, the main deck Possessed Aven made the difference in the mirror matchup."

Murakami's deck has been tuned for the blue metagame. In addition to the controlish main deck Probe that combines card drawing with disruption, it also sports maindeck Gainsays. The final build was based on results from the grinders, which is how one of Murakami's teammates qualified. The deck betters its odds against non-Psychatog decks with the inclusion of Flametongue Kavu and Terminate, which Murakami says is meant to deal with Spiritmonger, as well as allowing him to not waste counterspells on a Psychatog in the mirror matchup. Given that Murakami was able to go 6-0 on Friday in a field dominated by Psychatogs would indicate that he made the right metagame call. It also means he has good chances in the Top 8, given the representation of Psychatog decks in that field.

" 'Japan National Team Member'...It has a nice ring to it. I wouldn't mind people calling me that."