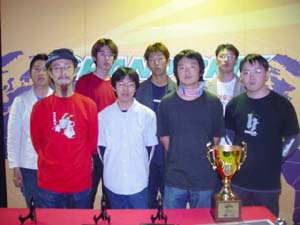 Top 8 playersComing less than a week after Worlds, one would expect that at GP Sapporo players who were in Sydney would have an advantage, having since the latest block constructed tech first-hand. However, thanks to the power of the Internet, everyone had access to the pros' decklists.

As a result, it was like having Kai Budde, or Walamies, or Gary Wise in attendance, as people studied the field and chose the deck they felt had the best chance in the format. That's not to say there hasn't been any evolution--many decks were slightly different from what was seen in Sydney, as players added their own touches or tweaked a deck for the anticipated metagame. 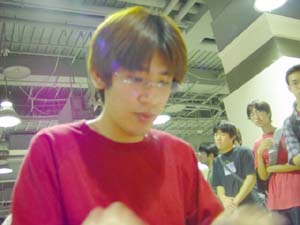 Masahiko MoritaIn the end, it was the most evolved decks, piloted by the most practiced hands, that made it to the top.

Two players who attended Worlds made it into the Top 8, both familiar faces: Masahiko Morita and Itaru Ishida.

Although Morita's final results at Worlds were less than spectacular, he rode Kai Budde's Quiet-Roar deck to a Top 8 berth, winning the deciding final Swiss round. A regular Top 8 GP finisher, he is hoping to make Sapporo a back-to-back win after his victory at Nagoya. 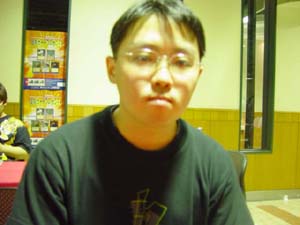 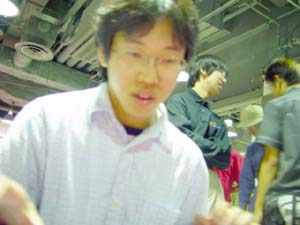 Nobuaki ShikataShikata is becoming recognized as a strong player in Japan, due to his Best 4 finish at GP Hiroshima and placing in the Top 8 of the 2001 Finals. Although he's running the same archtype as his roommate Morita, he has tweaked it slightly. Whereas Morita is running Werebears, Shikata has elected to use Basking Rootwalla instead. Shikata is a great player to watch, as his reactions are exaggerated, and you can tell he really enjoys just playing Magic. 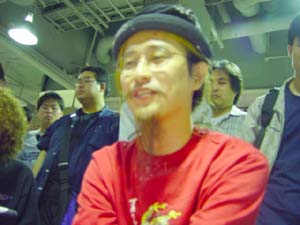 Satoshi NakamuraIshida and Morita weren't the only familiar faces in the Top 8. Once a bank teller, Satoshi Nakamura is now a game designer himself, working with Wizards of the Coasts on various projects in Japan. Although he hasn't had good results of late, he was able to take a UG madness deck to the top of the Swiss standings and draw into the Top 8. The winner of the first GP Sapporo in 2000, he is hoping lightning strikes twice this weekend. 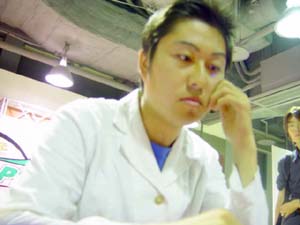 Kenji KimotoThree amateurs have clawed their way up the ranks to join the veterans at this event: Kenji Kimoto, Shin'ichi Kumagai, and Yuuta Hirozawa.

Although he is an amateur, Kimoto is no stranger to Japanese players, having played a Psychatog deck to an undefeated finish on Day 1 of this year's Nationals. A college student, he builds and tests his decks himself, usually in trials or qualifiers. He played in Friday's trial, using the data gleaned there to make final adjustments to his UG deck. 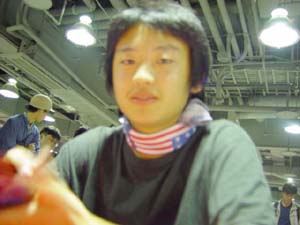 Yuuta HirozawaHirozawa may be only 15 years old, but he's no babe in the woods. He was on the team that won the second Japan High School Championships in 2001. Many Japanese pros have their eye on him, as he is certain to become a force to be reckoned with. His Top 8 finish today is proof of that. 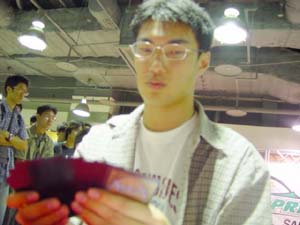 Shin'ichi KumagaiA sophomore in college from Iwate, Kumagai practices in a Magic club at his university. 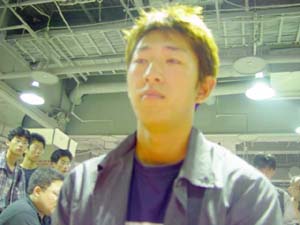 Kenji KinoshitaA regular at Osaka card shops, Kinoshita is known for his love of green. He is using a threshold UG deck this weekend.