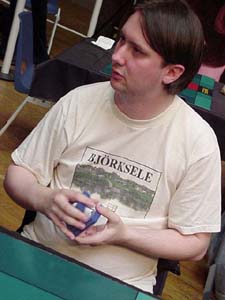 Team Punisher, consisting of some Finns, some Swedes and a token Canadian, has done really well lately, placing a lot of its team members in the Top 8 of many international tournaments. Anton Jonsson, coming straight from a Top 8 finish in 2002 Pro Tour-Nice, finished second after the Swiss and made sure Team Punisher would be represented in the Top 8 of the 2002 European Championship as well.

"It's fun of course," the 24-year-old says. The computer science student from Umeå, Sweden, didn't expect the good finish. He never does. In fact, he doesn't believe in high expectations. "It is pretty bad to expect to make the Top 8. I don't think it helps you play better. So I just take each game at a time," he explains.

This time it all came down to the very last game of the very last Swiss match. Anton was playing against a Frenchman, and the score was 1-1 after two games. His opponent had the upper hand in the third game as well, but Jonsson played well and was able to get the win he needed. Still, he wasn't nervous. "I'm not as nervous in the last matches, more so in the first ones. Maybe I am anxious to play. But once I have played a few rounds, I'm not nervous anymore," Anton reveals.

While quite a few pros chose not to playtest all that much for the Euros because they can't win any Pro Tour points, Team Punisher spent some time preparing. "I just wanted to go to the Netherlands. For me this was a short vacation. But Tomi Walamies, mostly, pushed us into testing. After a while, I wanted to do well, so that the testing would be wasted. So I tested some more," Jonsson says.

The modified Trenches deck is supposedly good against green. In the quarterfinals, however, Jonsson will play David Bruckner from Germany, who is with Psychatog. Jonsson beat him in the Swiss in a match where he, according to himself, was lucky and played badly. "It is a difficult matchup. I think my chances are fifty-fifty," Jonsson says.

Jonsson doesn't really want to make any predictions for the playoff. He has one wish, though. "I care about the quarterfinals," he reveals. After making two Pro Tour Top 8s and then losing in the quarterfinals both times, he hopes to get past that hurdle, for once.

If he does, it may be thanks to his t-shirt. In the last tournaments, Anton has worn a white T-shirt saying "Björksele", the name of his grandmother's village. "I started wearing it in a big tournament in Stockholm, and I won. Now it's my lucky shirt, and I have several. People want to get the T-shirt, and I am working on that," he smiles.

After getting the decklist of his quarterfinals opponent, the Swede headed off to a team dinner with Team Punisher. His plan was merely to get something to eat, and then to head back to the hotel to get some sleep. "Hopefully, Jens Thorén won't be there," he remarked before leaving, "he always snores."