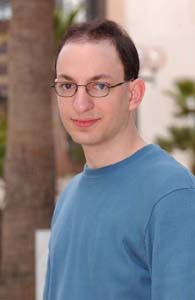 For Benjamin Niedrig, this past weekend in Nice has been a very pleasant surprise. This is the first Pro Tour for the 21 year old from a small town in Switzerland that is home to about four thousand people. So how does he manage to play Magic? "I play mostly with my two brothers, and Mario Steger, who is a good friend of mine. He also played this weekend." Niedrig has been playing since Fourth Edition, but he only started playing in tournaments three or four years ago. He now plays in big tournaments in Switzerland, and a few European Grand Prix. His previous top finishes were tenth at Grand Prix Cannes (which was a team event), 23rd at Grand Prix Cologne, and Top 8 at Nationals last year.

Magic Online also helped Benjamin prepare for Nice, although it was more for fun than practice. "I drafted a lot on Magic Online, and I played some real life drafts, but I didn't specifically practice for the Pro Tour." He's also right at home with drafting, since he doesn't particularly enjoy playing Constructed. "I like Limited formats much better than Constructed. I am a bit lazy, so I don't like to prepare and playtest a lot for big events. If your opponent plays a land in Constructed you know what he's playing. In Limited, you don't know what's going to happen. You know the cards your opponent has, but not exactly. There are always fresh situations, but Constructed often repeats itself."

Where strategy is concerned, Niedrig aimed to stay flexible, although he has a preference. "I like to draft black, but I don't sit down thinking I have to draft it. Still, I'm happier taking Ghastly Demise or Gravedigger than something in the other colors. But, there's no color combination I won't draft. I've tried every combination, and each one can work."

Niedrig will go to sleep tonight with the knowledge that he could very well be on his way to becoming a Pro Tour champion in the morning. Still, he doesn't have high expectations. "I'm already happy with what I've accomplished, but anything is possible. It's been a really fun Pro Tour, and I'm going to be here more often."