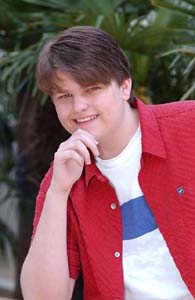 It's been a long time since Brian Davis lost to Bob Maher in the finals of his first Pro Tour, at Chicago 99. Since then, Davis has been a mainstay on the Pro Tour, but this is his first time back on the stage since he first arrived there three years ago. "I didn't really have a strategy at all (for this Pro Tour). I just took whatever cards came to me. A lot of people wanted blue/black or green, and they didn't want to touch red or white cards, but I was open to any color combination." Indeed, Davis switched around a lot with his drafting strategy, and didn't use the same color combination twice. "I played blue/white the first draft, blue/green splash red the second, blue/black the third and green/black splash red. I had a pretty good variety of what I drafted."

Even though he was obviously very successful, Brian didn't spend much time practicing. "I did hardly any testing for this Pro Tour. I quit playing Magic Online right when Torment came out, so all my practice online was Odyssey only. I didn't do a single real life draft to practice for this. I think I did one the day before." So why did he do so well even though he didn't practice? "Obviously I got very lucky, because my playskill certainly didn't make it happen. I made quite a few mistakes. I don't know how I made Top 8. I wasn't even expecting to make Day Two at all!"

During his first Pro Tour Top 8, Davis choked under the lights, losing the match in five games to Maher, when many spectators noticed he should have won all five games if not for mistakes. Is this his chance for redemption, and an opportunity to kill off the demons? "Perhaps. I guess you can't really diss on someone who has two Pro Tour Top 8s. One could be a fluke, and I got ninth at Worlds, but that didn't really count either. So I'm very happy to have a second Top 8 under my belt, but I think that anyone who knows me pretty well will still see the demons of the past and think I'm not that good." But now that he's been in front of the cameras, will he be less intimidated and perhaps not make the same mistakes? "Well, one would hope that I would learn from past experiences, but most likely I'll make a mistake at some point in time and never hear the end of it. It's almost certain."

So will Brian Davis win Pro Tour Nice? "I don't think I'll win. My first opponent is Anton Jonsson and not to diss on him or anything but he's certainly not...if I had to play Svend Geertsen in the first round or Kai Budde I'd be scared, but everyone else in the Top 8 doesn't scare me. I think I'm a better player than everyone else in the Top 8 except for those two guys. But, anything can happen in the draft, and anything can happen in the game."