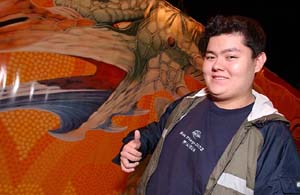 Carlos Eduardo Romao is living a dream. "I can't believe I made the Top 8," said the 20-year old Brazilian, "It's like a dream come true."

Latin America has never had as much as a single PT Top 8; now, alongside Argentina's Diego Ostrovich, Romao has given them two.

Romao's link to Ostrovich is not just superficial; those two, along with all the other Latin American players that were qualified for this tournament, worked together on decks and strategies using a mailing list. The list included players from Brazil and Argentina, as well as Chile, Venezuela, and Uruguay, and was known as the "Latin American Alliance." "We emailed in English," said Romao, alluding to the necessary "common language" between the Portuguese-speaking Brazilians and the rest of the Spanish-speaking countries.

The Alliance was obviously a smashing success. Romao went 6-0 in Standard with a blue/black Psychatog deck tuned to beat the mirror, and 4-1-1 in block with a blue/green deck devised by the Argentinean players, but tuned by the Brazilians. Draft was Romao's weak spot, but he compensated for his 3-3 performance with a strong showing in the constructed formats.

Romao is no stranger to success in Magic. He made the Top 8 at Grand Prix Sao Paolo in 1999, and did one better by winning GP Rio de Janeiro in 2001. He placed in the Top 4 of the Latin American Championships in 2000, the Top 8 of Brazilian Nationals in 2002, and was invited to Worlds as one of the top rated Latin American players.

Now he is locked in another battle with Ostrovich: which one will get to attend the Magic Invitational, which invites the Latin American with the most PT points? "Before this [Worlds], I was ahead of him five points to two. But now he has the team points [since the Argentinean team did well in the team portion]. The best scenario is if one of us wins Worlds, the other one gets to go as top Latin American. We both can go."

When he is not gaming, Romao studies marketing at Anhembi-Morumbi University in Sao Paolo. But today, studies are the farthest thing from his mind; instead, he must focus on beating Tuomas Kotiranta's Burning Tog deck in the quarterfinals. "It is a difficult matchup," admitted Romao, "but I have some chance."

Romao can't wait to get home, however, and revel in his success. "This is a great day for Latin America. The game will rise there now."