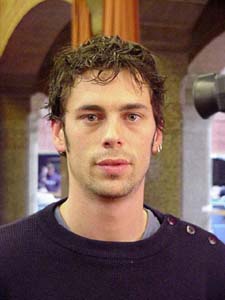 When sitting down with one of the two Frenchmen in this Top 8 I noticed his laid-back attitude for the first time. He just seems to take life the way it comes. Only six months ago, Christophe Haim was selling shoes in Paris to make a living. Now he makes enough money playing Magic and "doesn't really do anything". A 13th place finish in Grand Prix-Barcelona, a Top 8 at Pro Tour-Osaka, a third place in French Nationals and now Top 8 at the European Championships, mark 2002 as the breakthrough year of Christophe Haim.

Playing a blue-red-green madness deck to a 6-1 record in the Standard portion of the event, losing only to fellow countryman Pierre Malherbaud, Christophe made Top 8 while beating name players such as Raphaël Lévy and Bram Snepvangers. Combined with the 5-2 draft record he managed yesterday, this was just enough for 8th place.

In the Top 8 Christophe's quarterfinal opponent will be his friend and playtest partner Amiel Tenenbaum, who plays a similar deck, a bit less focused on the Madness mechanic. When asked for his predictions about tomorrow's match he answered in his usual relaxed manner: "I don't know who will win, we haven't tested it."

3 Deep Analysis 3 Roar of the Wurm

4 Roar of the Wurm