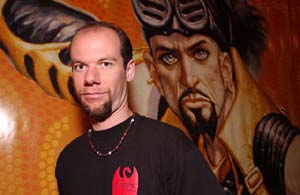 For a long time, Dave Humpherys was known for two things: ninth-place finishes and success in the team format. After finishing 9th at PT Paris and 9th at PT Rome, Humpherys broke out—first, a legitimate Top 8 at Pro Tour New York 1999, then a win in the very first team Pro Tour in Washington DC alongside Darwin Kastle and Rob Dougherty as "Your Move Games."

More recently, however, Dave's individual accomplishments have been very impressive. He won the Invasion block constructed Grand Prix in Minneapolis, then put up a Top 8 in the Extended Pro Tour in New Orleans before making it two in one year here at Worlds.

This tournament was supposed to be part of a vacation for Humpherys. Having just finished his PhD in Biology from one of the top learning centers in the world, MIT, and having done a dissertation on cloning, Dave decided to engage in a little R&R, taking an 80-day trot around the globe. He's been to most of Europe and parts of Southeast Asia so far, and planned to be in Australia during the Magic World Championships before moving on to New Zealand, Hawaii, and Alaska. How convenient!

So how did the 30-year-old Dr. Humpherys find time to playtest during this excursion? "I haven't touched a card in a month and a half," he confided, "except for one afternoon I spent in a card shop in Finland," where he happened into two-time PT winner Tomi Hovi. Small world.

"I built two decks before I left and gave them both to Rob [Dougherty] before I left because I didn't want to lug them around with me. Once I got here, I had a lot of changes to make." Like adding Wishes to his Psychatog deck, for example. He'd been paying attention to the metagame via the Internet as he traveled, and made sure to tune his "Cunning 'Tog" deck to be able to beat the mirror as well as blue/green madness. "Unfortunately, I never played against either of those decks, which is why I went 2-3-1 on Day 1." Luckily for Humpherys, the Top 8 is chock full of Psychatogs.

Two cards stand out in Humpherys' deck: Sulfur Vent and Wonder. "I've been playing the Vents since San Diego," he explains, "and they're only bad the turn you play them. After that, they help with Upheaval so much that they're worth it." The Wonder was put in as a response to the growing tide of Wonders in all the blue/green decks. "A lot of times blue/green just discards Wonder and sails over your Psychatog. I can just discard my own and block." Plus, Wonder gives him the evasion edge in the mirror "without ever casting a spell."

Humpherys went 5-1 in draft—his only loss to teammate Kastle—giving himself the slimmest margin to make top 8 going into Day 3. He needed a perfect 6-0. "Did I think I'd do it? Let's just say I gave Rob back his Cunning Wishes after the second day."

YMG's newest member Zvi Mowshowitz got a blue/green Standstill block deck from some friends in Singapore—Nick Wong, Kelvin Hoon, and Albertus Law—and it played so well in practice that Dave gave it a whirl on Day 3. And just like that, the perfect 6-0 he needed, including a nail-biter final round match against reigning world champion Tom van de Logt.

Now that he is in the Top 8, Humpherys has practiced extensively against the deck John Larkin will be using against him in the first round. "It seems like I have a big advantage on paper with four Deep Analysis main, but in reality that edge is really slight. The mirror comes down to mana draws and things like that so often that I don't think it'll be easy."

And what happens after the tournament? Dave will not be returning to Boston, where he spent the last 7 ½ years studying. Instead, he'll be headed to San Diego where he grew up, hoping to land a job in the biotech field. As for YMG, "We'll still work together. I'll just have to introduce myself to Magic Online."