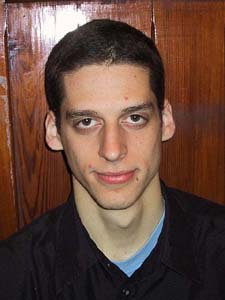 An original German from the heart of Germany, München, made it to the Top 8 at Euros. Together with his countryman Roland Bode he is one of the German representatives here since Kai Budde only finished 22nd.

Not an unknown name to many, David played with the German National Team during 1999 and was runner-up at Worlds Team Competition. The 20-year old student drafts three-four times a week at his local store and was qualified for Euros through his ranking.

After going 6-1 during the first day he decided to play his own version of Tog with four copies of Chainer's Edict and three copies of Force Spike, which he piloted to the final 8.

This particular version of Psychatog also used Budde's tech card, Probe, but was able to beat Frog or other red/green versions with the changes he made. During the second day he was paired against three of those decks and won each time.

When asked about his chances in the quarterfinals he said it would most definitely be a very interesting match with chances being cut right in the middle for each one.

An avid sports fan he is pulling for his home team in the soccer World cup and he even considered the possibility of not play testing the next day, during the "soccer-break" to watch the finals.