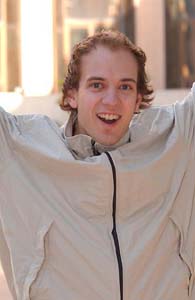 When Eivind Nitter beat Ed Fear in the last round of the swiss to make his first ever Pro Tour top 8 finish, his face showed this expression of relief and happiness. The top 8 finish was quite unexpected for the 23-year-old European Champion. "I am used to ending up somewhere down there, and when you do, you lose some of the spark. So it was great to regain some self-confidence, because I was wondering if I was doing something wrong," Nitter says.

The Norwegian punk, who always sports fancy clothes and even fancier accessories (like handcuffs at Worlds in Brussels), got his international breakthrough when he won the 2001 European Championship. The results at Pro Tours, however, has lacked for Nitter, and while he previously was able to make day twos pretty easily, he suddenly found himself going to several Pro Tours in a row without making it to the second day.

"I was about to fall off the gravy train, even though I felt that I was pretty okay at Magic all the time. If I hadn't made the top 48, I would have fallen off, so this was right on time," Eivind grins. He has even taken a year off school to play Magic, and he plays almost every day, mostly money drafts for the excitement – "at least I learn the format through it" – but also at least three booster drafts every week.

His strategy for the tournament was to draft white and blue. "I think that's a stable deck, and I feel that with blue and white, I am in control," he explains. He didn't stick to the formula throughout the tournament, though. In the first draft, he went with blue and black, then he played white and black before falling into blue and white for the two last drafts. The first deck of the second day was rather weird, though. Eivind played a base of blue and white, but he splashed green for a Mystic Enforcer and black for a Laquatus Champion – a touch that gave him a perfect 4-0 record in that draft. This put him in a position where a 2-1 record in the last draft would be enough to make the playoff, but after losing one match and winning one, he needed a win against Ed Fear's strong red and black deck to pull it off.

"I didn't think I could win the last match, but in the first game I top-decked a Major Teroh the last turn I possibly could before it would be over. In the second game, I got the god draw while he was mana flooded," he says, admitting that he was quite lucky. Still, after quite a few bad draws, he was happy to finally get an exceptional draw, and the timing couldn't have been better.

Now, Nitter is happily looking forward to the playoff. "Now that I've come this far, there is no reason to hold back," he smiles, pondering on what to wear for the occasion. "I've got a lot of stuff in my suitcase," he says, and considering the things he has worn on previous occasions, there is no reason to doubt him. Being somewhat of an exhibitionist, he would like to make it past the quarterfinals so that he can get on camera. "I was filmed in the Euro Championship, and that's why I did well," he thinks.

While he is paired up against Gary Tulim in the quarterfinals, Eivind would actually like to meet Kai Budde. "He'll get it from me. I want to beat him out of day three of a Pro Tour, that would be an accomplishment," Nitter says in his countryside style, Norwegian accent. And should he happen to win the whole thing, then he will party in the countryside style as well and get drunk and celebrate with his friends. "I also promised Øyvind [Ødegaard] and Lovre [Crnobori] that if one of us won, then he would take the others to Nice's best restaurant," he reveals – a promise that chances are he wouldn't mind at all keeping.