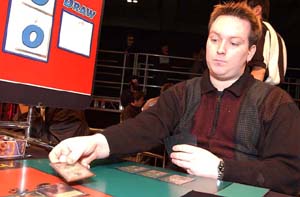 If you want to talk about rising stars in the game of Magic, look no further than Jens Thoren. Coming off of a second place finish in San Diego, Jens conquered the swiss field in Osaka, completing day one with a perfect 7-0 record. He completed his dominance by finishing the swiss rounds in 2nd place with a record of 11-2-1.

Hailing from Sweden, this affable man only started competing professionally two years ago. Although he played Magic since Ice Age, only recently did he enter into the Pro Tour circuit. His finishes include 2nd place at Pro Tour San Diego, 5th place at Pro Tour NY 2001, Top 32 at PT Barcelona, and 5th at this year's Euros. Quite an impressive resume for someone who became serious about the game less than 24 months ago!

Jens played a mono-black control deck this weekend. His team had developed two decks; one his, and one a green/white deck centered around taking advantage of madness creatures such as Arrogant Wurm. Five members of his team competed in Japan with three making the second day, including Morgan Karlsson and Mattias Kettil piloting the G/W creation. Interestingly enough, Jens was leaning towards playing the two color deck, until he finally decided to run with a mono colored deck to avoid mana issues.

The tournament started out roughly for Jens, as he faced a black deck which utilized Gravediggers to negate the advantage of Innocent Blood and Chainer's Edict. The Swede worried that he might face the pesky creature over the rest of the tournament, but he did not. That first match ended up being the toughest of the day, and the next six rounds went by with ease as Thoren piled up win after win. All told, he faced seven mono black decks, four blue/black decks featuring Psychatog, Upheaval, and Zombie Infestation, and the rest Blue/Green Madness decks.

Knowing now how the field shaped up, Jens commented that he would have removed the two Last Rites from his sideboard, along with one Haunting Echoes and one Laquatus's Champion for 4 Braids, Cabal Minion. He felt that Braids was an instrumental card in winning the mirror match, although he stressed that by far the most important card involved when playing black on black was Mind Sludge. His own tech consisted of running four Rancid Earth main deck to deal with squirrel decks and gain mana advantage against other black decks, and 4 Mesmeric Fiends in the sideboard, which allowed him to delay enemy Braids and Sludges in the black on black match.

All told, Jens was very happy with his performance so far this weekend, and seemed all smiles as he headed off to get some rest before the top 8 elimination rounds tomorrow. He seemed confident in his ability to win, and hoped to finish just that one place higher than he did in his last pro tour performance!