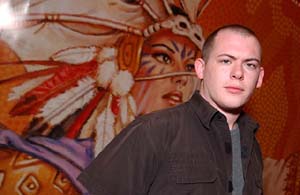 Rugged Irish National Champion John Larkin may come off as a happy-go-lucky guy, but he is truly one of the game's hard workers. When the 24-year-old Dubliner qualified for Worlds, he didn't rest on his laurels. Instead, he set out to qualify for even more events. He won an OBC qualifier for Pro Tour – Houston with his trademark blue/black Braids deck, and took two of his friend—creating what he called an "Irish Raiding Party"—into Scotland to win a qualifier for Pro Tour Boston. And all that while practicing for this event.

Larkin works so hard because he knows it pays off. Throughout his Magic career, which started around the time of Ice Age, he has won Irish Nationals three times and qualified for numerous Pro Tours, including the Masques Block Constructed PTNY00 in which he made his other Top 8.

Larkin's playtest group currently encompasses just other Dubliners, as opposed to the "European Alliance" of the Lin-Sivvi days. But Larkin has proven that big name partners are necessary for big time results.

The Standard deck Larkin played was a basic black/blue Psychatog deck, good enough for a 4-2. He racked up five wins in draft, then leaned on the Braids deck to give him the last four wins he needed. "That deck was based on Nicholas Olivieri's Osaka deck. I needed something that beat black, and beat blue-green. I don't like blue-green; it has the same mana base as draft decks."

Larkin's success help put his Irish team at the top of the standings for the first two days of competition. But a collapse by the other players on the OBC day left them too far back in the standing to make a serious run at the title. "After we lost our first draft, I knew it was over," lamented Larkin. But it was fun while it lasted, and now he must turn his attention to more pressing matters, such as the marathon Psychatog mirror match looming with the deliberate Dave Humpherys. "I'm tired already," joked Larkin in his trademark brogue.

Now that he's probably back on the gravy train, Larkin expects to be attending all the big events this coming year... except maybe the Asian Pro Tour in March. "I always go skiing that time of year," Larkin explained, "in Canada. Skiing is better than Magic."

It doesn't seem likely that Larkin will be the World Champion in skiing any time soon, but by the end of this weekend he might be for Magic. Then we'll see which he thinks is better.