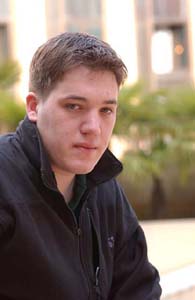 "I'm not as excited as earlier, but I am happy. This top 8 will put me in the Masters for another year, and that makes me very, very happy," Kai Budde says after doing it again. Thirteen rounds into the 2002 Pro Tour Nice, Budde drew his way straight into the playoff, adding another astonishing result to his already impressive resume.

The 22-year-old student from Hamburg just never seems to stop. He has five Pro Tour wins under his belt, and yet he continues to absolutely dominate a game where luck is an important factor. His merits are frequently a subject of discussion, and people have commented that either Kai has to be really, really lucky, or, he is just really good at cheating. "I am definitely not cheating," Kai laughs, but admits that he has been really lucky. "Of course I am lucky. We draw cards. More than once I've drawn cards from the top of my deck. But you have to be in a position to be lucky. If you aren't a good player, then you won't get lucky multiple times in a row."

It is a fact though, that Kai spends a lot of time playing the game. Often, he sits down at midnight to draft online, but he argues that he spends more time playing than actually practicing. For the Masters Series, he only played about 20 games mostly because he doesn't think single elimination makes it worth the while to test a lot. Still, Budde has a basic understanding of the game that makes him able to make many right decisions in a game where there are plenty of options to choose from.

In addition, the German seems to be really good at the Odyssey/Torment limited format. He made the top 32 in Grand Prix Heidelberg, he won Grand Prix Antwerp and he finished third in Grand Prix Naples, all of which were the same format. "I think the format is a little bit luck-based. Some cards are overpowered, and Torment is bad for drafting. If you play black, then going into Torment you don't know what your deck is going to be like. It is a gamble," Kai thinks.

His strategy was merely to draft blue cards whenever possible, and he was with blue in three of the swiss drafts. The one time he chose not to play blue, was when he opened a Kamahl, Pit Fighter. Just to make things even better for him, he was passed a second Kamahl as well. "I got it as the fourth pick out of pack two. Kamahl is pretty good," Kai grins.

The German Juggernaut made it all the way to the semi-finals of the Masters Series. If he should happen to win the Pro Tour, then he would win quite an amount of money. "It would be nice for my bank account," the 22-year-old chuckles. He points out though that he is living off the money he earns as a player, and the student isn't exactly a rich man in spite of his winnings. Like most other people, he pays rent and he has a car that costs money, but still, he doesn't really have to pay attention to what he spends. He is in fact getting really close to Jon Finkel as for lifetime winnings, and with another Pro Tour victory, he will get eat up another chunk of Finkel's lead.

"I could win," Kai thinks, a quite reasonable statement considering his previous accomplishments. Still, for the top 8, he will simply sit down at the table and see what is in the packs for him. After the Pro Tour, he will go back to Hamburg to study a little before he is off again to play in the German Nationals. Now for those who wonder if Kai is a superman who can be a successful student in addition to being a wrecking ball in the Magic environment, well, he isn't. Although he has tried to study computer science and maths, going to Nice and to the Nationals will ruin at least one of his courses. But skipping Nationals was not an issue. "Nationals is the funniest event of the year," Kai smiles – and after all, should he make it to the National Team, then at least his team-mates should be happy. Because after all, he is the best.