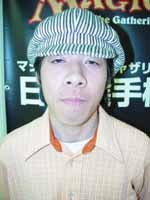 This is Shiki's third Nationals, and hopefully the third time's the charm for this 19-year old player from Nagasaki.

Although Shiki is a soft-spoken and polite, he becomes a different person at the game table. He plays extremely aggressively, and shows no quarter to his opponents. In 2001, he played AggroWaters, and chose Star-Spangled Slaughter for last year's Nationals. This year, he played Steroids, which turned out to be the Standard deck of choice. When asked what the key to winning with an aggressive deck is, he answered "Timing and good draws."

That belief was proven in Round 11, when he was paired up against Ken'ichi Fujita's mono-black control deck. In the third game, Fujita, going first, opened with a Duress. However, he found nothing but creatures and lands in Shiki's hand. Shiki's first draw: Compost. Fujita could do nothing but shake his head at his bad luck. Shiki went on to draw two more Composts and throw lots of burn in Fujita's face for the win.

Until now, the highlight of Shiki's playing career was winning a San Diego QT. Still, looking back at the history of Magic in Japan, one will recall that Tadayoshi Komiya won the national crown when he was also only 19. Komiya also earned an invite at Regionals and went all the way to the top. Will Shiki be able to follow in his footsteps?