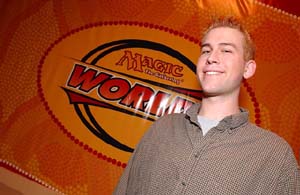 If you're on the Internet reading about Magic, chances are you've run across the site known as "MiseTings," a satirical look at the Magic community masterminded by former PT player Mike Bregoli. And if you read that site regularly, you've seen Ken Krouner's "Good Man of the Week" column, wherein Krouner awards the nominal "Good Man" title to someone that has impressed him somehow recently, either through personal favor or in some bigger community-affecting way.

If you're on the Internet reading about Magic, you've probably been following the coverage of this tournament, wherein you will have learned that Krouner is not only good at playing favorites, but playing cards as well.

Ken Krouner, 24, of Rochester, NY, has been playing Magic since Antiquities was released in early 1994. He spent most of his career in the background, showing up in other people's tournament reports and roadtrip stories, until his big breakout this season. Krouner's first Pro Tour was Casey McCarrell's New York '99, but the big finishes started arriving recently. With 14th at GP Houston, 7th at GP New Jersey, 9th at US Nationals, and a Top 8 here at Worlds, Krouner has emerged as one of the big-name American players.

His claim to fame in this tournament is going 0-3 to start, and then getting a bye in round 4 before ripping off eleven straight wins including a 6-0 on draft day. Krouner credits Gary Wise for this turnaround, saying Gary took him aside after his abysmal beginning and told him to change his attitude. "I had to triple mulligan twice in the first three rounds, and I didn't think losing was my fault, my deck just hated me or something. Gary told me to shake that attitude, go yell at a tree, whatever it took, and get my head in the game," said Krouner. Wise's words worked wonders.

Krouner's 6-0 in draft here mirrors the 6-0 he put up in the same format at US Nationals. So is he one of the best drafters in the world? "I don't think that 12-0 means anything. I was a little more prepared than most people at Nationals, and I got really good draws here."

As a full-time student at the Rochester Institute of Technology as well as a manager at a movie theater, Krouner didn't have a lot of time to practice for this event. Mike Turian game him a Standard deck—a souped-up version of the Opposition deck that won US Nationals—and Brian Kibler game him the blue/green block deck that got him to the Top 8. As for actual playtesting, what little he did was done either on Magic Online, or with Ed Fear and Alex Melinkow in New York.

Actually, it is "2x Good Man" Fear who is directly responsible for Krouner even being here. "I was going to fly here on my father's frequent flyer miles," said Krouner, "until I found out he didn't have any. Then the next thing I know, Ed Fear calls me and says he bought me a ticket." Krouner was the first of six players Fear ended up paying for. "I told two friends, and they told two friends... I guess I'm responsible," said Ken. As part of the deal, Fear gets a cut of Krouner's prize money, and everyone gets to go to bed happy.

Krouner spent most of Saturday practicing his first-round match against Diego Ostrovich. So does Squirrel-Prison beat Psychatog? "It did before Cunning Wish," lamented Krouner, "Now it's harder because of cards like Aura Graft, Teferi's Response, Recoil, and Psychotic Haze." Still, Krouner likes his chances in the first round, and if things hold up well, he could be taking on Sim Han How in the all-Squirrel finals.