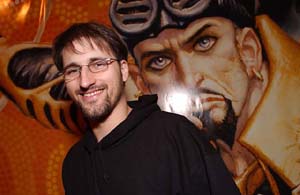 Mark Ziegner came into this tournament as a footnote to Kai Budde—a lucky member of Budde's National Team that was destined to play in the team finals on Sunday. That may still be true, but Ziegner has stepped out of Budde's shadow and stolen quite a chunk of the spotlight for himself.

Ziegner, a 29-year-old court clerk from Mainz, Germany, has been to four previous Pro Tours, but had never before made a dollar. Now, only three people stand between him and $35,000. His best accomplishment to date was a prior appearance on a less-successful German National Team.

Ziegner didn't get much practice in for this event; he just played with the normal people at his local card shop. His group copied Budde's Psychatog deck from European Championships and tweaked it a bit, and that deck got him three wins and a draw in Day 1. For Day 2, Budde suggested that Ziegner draft blue/white, which suited Ziegner just fine as he doesn't like to draft "aggressive green-red cards." Budde's advice was sound; Ziegner tallied a perfect 6-0 mark in the booster draft portion with blue and white cards. Looking to cement a good team standing for Germany, Budde gave Ziegner his block deck, a blue/green build based on Grizzly Fate. Ziegner won three of the first four rounds on Day 3, then drew twice to make the final 8.

So now what? Ziegner is poised to take home the biggest possible prize—the combined individual championship and the team championship. Germany faces the USA in team Rochester on Sunday, in the midst of Ziegner trying to take the individual portion. That makes for quite a busy day.

"There's no pressure now," smiles Ziegner. "The pressure was at the end of the draft day when everyone was saying, 'Oh, you have to make the Top 8 now.' Now there's none. I'm just happy with my accomplishments and I'm trying not to make any mistakes."

Ziegner has to play Sim Han How in the first match of the day on Sunday, but he hasn't had time to playtest thanks to obligations to the German team. "Sim is a very nice person and it's fun to play him," said Ziegner, recalling his Day 3 match against Han How, which accounts for his only loss in the format.

It might be fun to play, but Ziegner would probably have more fun joining Jon Finkel as the only people to with the individual and the team titles at the same World Championships. With a little luck on Sunday, it can happen.