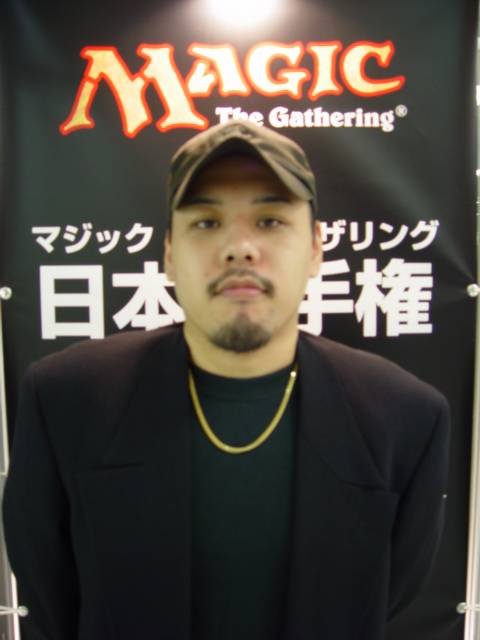 Higashino has long been a fixture of Japan's Magic scene. The 1999 national champion, he has since won two Grand Prix (Tohoku and Hiroshima), and is regularly seen on the Pro Tour.

Although he is best known for playing monoblack control decks, Higashino has chosen to run with the pack, fielding a Psychatog deck tuned by his friend, Tsuyoshi Fujita.

Higashino went 5-1 on Day One, his single loss coming from Yuuki Murakami, who also made it to the Top 8. With a little bit of luck, Higashino will be able to have a rematch with Murakami in the Semifinals.

Higashino stuck with his favorite color in the draft, going BR in the first draft and UB in the second. However, he wasn't able to get the cards he needed for a strong build in either draft, and ended up going 4-1-1.

Magic isn't the only hobby Higashino has, however. He is a fan of online games, and is frequently seen on Diablo 2 servers. Look for him as the handlename "goemon".

When asked how he made it to the Top 8, he said simply "The deck is strong," deferring to Fujita's deckbuilding skills. However, Psychatog is not an automatic deck. There are always difficult play decisions to make, so some credit has to be given to Higashino's skill at playing. The fact that he has never missed a Pro Tour since winning Nationals 3 years ago, and has two GP wins under his belt, only bears out his skill.

To date, there has only be one repeat national champion in Japan. Can Higashino follow in Toshiki Tsukamoto's footsteps?