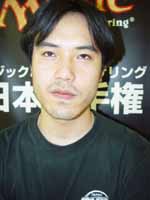 Osamu Fujita has been a part of the Japanese Magic scene for almost as long as anyone can remember. He is liked and respected by just about everyone who knows him. For a long time, people have been saying it's only a matter of time before he gets his big break. What a lot of people may not know is that he's been excruciatingly close many, many times.

Shuuhei Nakamura and Masahiko Morita are well-known for being "silver collectors"—that is, having a large collection of second-place finishes but no gold. (Morita at least managed to end his curse with a little help from his PS2 friends at Nagoya and Venice.) What people forget is that Osamu Fujita has been collecting silver medals longer than anybody. Grand Prix Hiroshima Finalist, 1999 Asia-Pacific Championship Finalist, Grand Prix Taipei Finalist…The list goes on. Still, in spite of such having such a consistent record, Fujita insists that this Top 8 finish owes more to luck than anything he may have done.

Fujita is a thinker, who carefully considers every play he makes. In spite of this reputation, he says he made a lot of mistakes this weekend. If he did make mistakes, Fujita's the only one who noticed them. He posted a perfect 6-0 record in the draft portion of the draft, a record which propelled him into the Top 8.

When asked about his deck choice, Fujita says "For the longest time, I couldn't make up my mind between black control and steroid. Both seemed to be a good choice in this metagame." Considering he earned the right to play on Sunday, I think we can safely say he made the right choice.

Fujita has always been stoic about his "silver collection", claiming that "winning isn't everything". Still, given that other silver collectors have passed him up in the title race, he admits that it would be nice to have some gold to add a little color to his collection. Hopefully, he'll have his chance on Sunday.