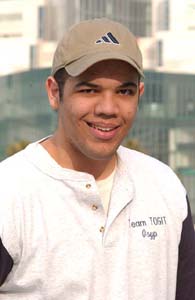 Osyp Lebedowicz (pronounced Lehb-Ihd-Oh-Wits) hails from New Jersey, USA. He's a member of the New Jersey Death Squad, a team which placed several members in the second day here in Osaka. This rising star first started playing Magic during Ice Age, where he attended more casual tournaments at the Outer Limits card shop. This, of course, is the store where many Pro Tour luminaries of past and present got their start in the game, including Jon Finkel, Eric Phillips, and Dave Bachmann.

Osyp decided to make the move to professional Magic during the Mercadian Masques block, and hasn't looked back since. At his first Pro Tour, in New Orleans, he tallied up an impressive 17th place finish. Although he considers himself more of a constructed player than a limited one, Osyp 'managed' to end up in 36th place in San Diego. This competition has made him a front runner in the rookie of the year race for the 2001/2002 season.

To prepare for this tournament, Lebedowicz originally started testing with his main team, including day two finishers Eric Ziegler, John Sonne and Scott McCord. He playtested a bit with the players from Neutral Ground before being contacted by longtime friend Eugene Harvey. He took to the Psychatog deck built by team CMU member Andrew Cuneo, but also had to option of using a Green/Blue deck designed by Antonino DeRosa. (As a side note: over a dozen players played DeRosa's version of the U/G deck, and every single one except Antonino himself made day two!). A week before Osaka, Osyp made the decision to play the Psychatog deck. The more sturdy mana base of the Black/Blue deck swayed him in the end.

The recent Rutgers graduate ranks in the top 20 of constructed Magic players in the world. He hopes not only to win this event, but also to get his rating high enough to be invited to the next constructed Masters series!