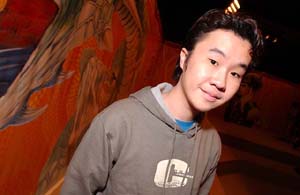 There are always "firsts" at every Magic World Championship, and Sim Han How adds one to the list: first Malaysian to make a PT Top 8. And, oh, this is his first Pro Tour.

Han How, an 18-year-old IT student at College Bandar Utama in Kuala Lumpur, Malaysia, came out of nowhere to dominate this tournament. He ran the table on Day 1 with a blue/green/red Opposition deck, and his 5-1 in draft kept him in first place in the standings. He stumbled a bit on Day 3, going 2-3-1, but the two wins were enough to let him intentionally draw in the last round to clinch a Top 8 berth.

Han How admits that he didn't expect to do well. Prior to this championship season, his only accomplishment in the game was making the Top 8 at Malaysian Nationals two years ago. But this year he took the crown in his home country, and he hasn't slowed down since.

His playtest group in Kuala Lumpur is comprised of a bunch of local players, none of which have had success on this level. But by playing and drafting twice a week, they helped Han How get the skills he needed compete on the Pro Tour.

Han How's Standard deck is a take-off on the Squirrel-Opposition deck Eugene Harvey used to win US Nationals. "I changed a few cards around," said Han How. "The big change was putting in Phantom Centaurs. Plus I changed the sideboard around."

Does Opposition beat Psychatog? It does if Han How is any indication; he beat both 'Tog decks he met in the Swiss, and he's ready to fight through the sea of them in the Top 8. Han How's quarterfinal opponent is Germany's Mark Ziegner.

"I'd say it's 50/50," said Han How on his chances against Ziegner. He doesn't have much data, however, since the time he might use to playtest has instead been spent Rochester drafting with Team Malaysia on the fourth day of Worlds. Malaysia ended up somewhere around 10th place according to Han How, a result he's happy with.

Even though he's qualified for future Pro events, Han How is unsure if he'll attend. "We'll have to see. This was all very unexpected." If he wins Worlds, expect to see a lot more of Sim Han How.