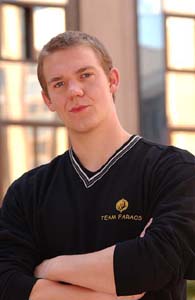 "This is the fourth time I have made the top 8, but it feels even better this time. It has been so long since the last time," Svend Geertsen grins. After lurking in the shadows for a while, the Dane stepped back into the spotlight by going into the playoff of 2002 Pro Tour Nice as the first seed.

It has been many years since the 15-year-old Svend Geertsen made a name for himself after making the top 8 at Worlds 1995. After that, he took Stompy to new heights, and at the young age of 21, Svend is one of the old-timers of Magic: the Gathering. The Dane's last top 8 finish came back in 1999 Pro Tour Los Angeles though, and after a sort of mediocre finish at the Danish Nationals just a week ago, Svend found himself unqualified for Worlds for the first time since 1995.

Now, he doesn't have to worry about that anymore. In fact, the Nationals drafting seemed to have prepared him for the Pro Tour. Svend started out 8-0, after initially asking Kai Budde for drafting advice. "I asked him what to draft, and he said I should draft blue," the 21-year-old reveals. While he followed the advice in the first draft, he didn't stick to it throughout the tournament: "At the top tables, you can't draft blue, because everybody likes blue." Geertsen likes the Odyssey/Torment format, though. "There are so many things to think about, many ways your opponent can screw up. I think it's a good format for good players."

Geertsen didn't practice a lot before the tournament. Normally, he just plays Magic once a month, but before tournaments, he plays a little more than that – for Nice, that meant ten drafts at Nationals and then five or six drafts after he got to Nice, which is significantly less than many of the top players who spend hours and hours trying to master the format. Still, he expected to do well. "Of course I expected it, I always do," he grins, but adds: "Not top 8 though, you can never expect that, but you can hope for it."

Back in the "old days", Svend used to be one of the faster players. "Back then, I think I had an advantage, some people would get stressed by the tempo. Most of my games took less than ten minutes," he smiles. Now, he is a little slower. "I am not used to playing that much, so I have to read some of the cards. It takes longer to get an overview, and to make sure I don't make any mistakes," he laughs. Svend doesn't want to make any predictions for the top 8. "I will just take one match at a time. Usually, I lose in the quarterfinals," he says – in spite of his three previous top 8 finishes, he hasn't won a Pro Tour yet.

While many other players have chosen to take breaks from their studies and play Magic professionally, Svend studies sports. Lately, he has only gone to the limited Pro Tours, partly because he thinks constructed is boring, and partly because he couldn't take the time off school. "I almost didn't pass tennis, because you have to be there a certain amount of the time," he explains. Things worked out for him though, and he was able to both go to Nice and pass the tennis class – although Svend reveals that he would go to Nice regardless and then take up tennis again on a later occasion.

In spite of having played Magic for years, Svend still enjoys the game. "I like the travelling, the friends, and the chance to win money. Many times I have stayed at people's homes, and that has been nice," he says. The veteran has no plans of quitting, at least not at the moment. "As long as I have the time, I will keep on playing, I guess. As long as it is fun, I will play."